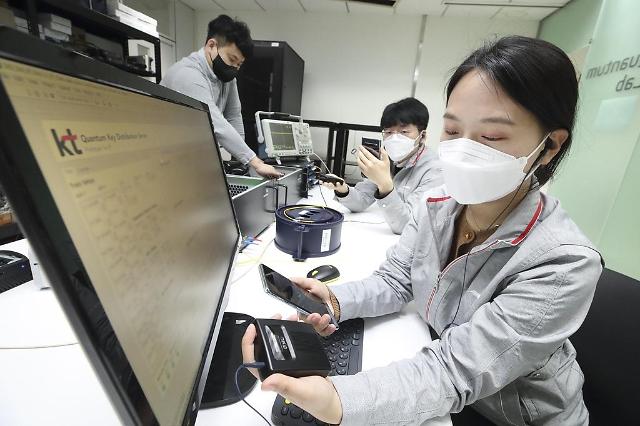 SEOUL -- South Korea's top telecom company KT has developed a quantum communication technology that enables smartphones to communicate with each other using quantum encrypted voice data. The technique can enable private companies and customers to use quantum encryption technology without a physical scrambler device that is attached to a network.

A scrambler is a telecom device that encodes a message or data at the sender's side. If a receiver is not properly equipped with a descrambling device at the receiver's side, the message cannot be deciphered. Scrambling is commonly used in satellite communications, radio relay communications, and public switched telephone networks.

KT said that a consortium including the telecom company and EYL, a domestic security startup, developed a  communication technology using a quantum scrambler to relay voice data between two smartphones. Voice is encrypted to provide protection against real-time hacking attacks designed to eavesdrop on conversations.

A quantum communication system is no different from conventional scrambler systems. However, instead of using tables of passcodes, it uses Quantum Random Number Generator (QRNG) to generate numbers encoded in a quantum state that is virtually unhackable. When data is encoded, it is delivered to its destination by Quantum Key Distributor (QKD). The technology has emerged as an essential security solution for safeguarding critical information in the 5G era.