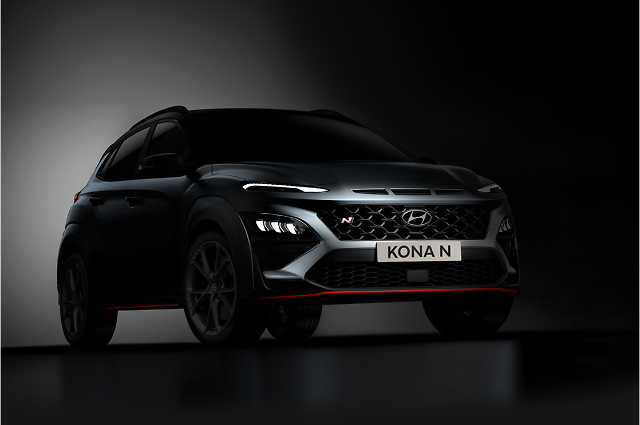 
SEOUL -- South Korea's Hyundai auto group released a teaser image showing the first sport-utility vehicle of its N brand targeting young consumers who wish to drive high-performance cars. The all-new KONA N is equipped with features such as exclusive alloy wheels and red accents that embellish the side sills.

The all-new KONA N will be the latest addition to Hyundai's N brand line-up and the first N model with an SUV body type. In April 2020, Hyundai unveiled the enhanced version of its high-performance car, Veloster N, saying the new model can accelerate from 0 to 100 kilometers (62 miles) per hour in 5.6 seconds. The N brand was first launched in 2015 to benchmark other high-performance foreign brands.

Hyundai said the all-new KONA N clearly represents a powerful presence and driving fun, combining the modern design of the new KONA with the bold and dynamic language of N models.

The front view is dominated by large, sporty and iconic air intakes, and the new light signature gives an aggressive, powerful appearance, Hyundai said, adding the lower grill was inspired by an aeronautic fuselage and extends to the side of the car, emphasizing its aerodynamic efficiency and speed.

A large double-wing roof spoiler for enhanced downforce gives spice to the rearview and incorporates a third, triangular brake light, Hyundai said. Lower down on the rear bumper, a large diffuser enhances the airflow departure and the sporty appearance is further emphasized through body-colored fenders, bringing KONA N visually closer to the ground.