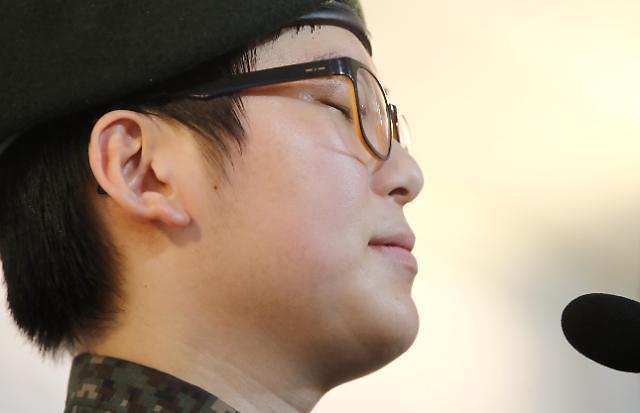 SEOUL -- Byun Hee-soo, a 22-year-old transgender soldier who has been the focus of social debate over her surgery while in service, was found dead. Rescuers discovered her body at her house after a state mental health clinic reported that it was not able to contact Byun for several days. Police asked for an autopsy to see if she committed suicide.

The former army staff sergeant had been locked in a legal battle against military authorities since she publicly called for her undisrupted military service through a tearful appeal in January 2020. The soldier was kicked out for receiving a sex reassignment surgery in 2019 after a military medical team rated the officer as a "handicapped" person who was not fit for military service.

Police said in a statement that Byun was discovered at her home in Chungju some 100 kilometers (62 miles) southeast of Seoul at around 5:29 p.m. on March 3. No will or notes were found and rescuers speculated based on the state of Byun's body that it has been several days since she died. She had been hospitalized for psychiatric treatment after her suicide attempt three months ago.

As a tank pilot at a front-line military camp, Byun underwent sex reassignment surgery in 2019 despite warnings by a military hospital that she may not be able to stay in the barracks if she receives a sex change surgery. She was discharged in January 2020. A military appeals court rejected Byun's request for her continued service. Byun filed a lawsuit against the Army Chief of Staff in August 2020 for her reinstatement. The first hearing was set for April 15.

All able-bodied South Korean men are required to complete mandatory military service for about two years. The military classifies those who have a strong female orientation or homosexuality as sexual identity disorder and excludes them from conscription. Those who become transgender are immediately exempted.