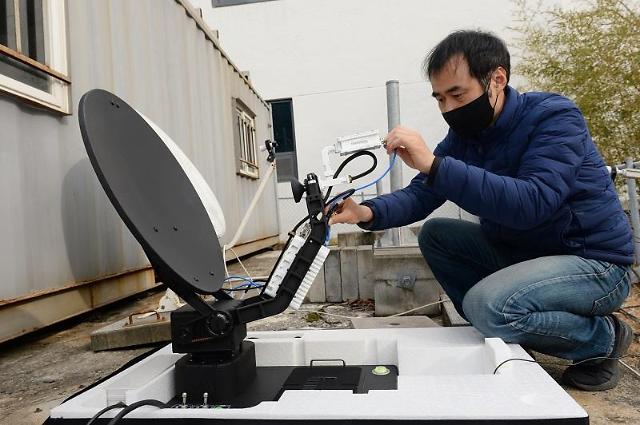 [Courtesy of the Electronics and Telecommunications Research Institute]

SEOUL -- A state research institute has developed a small modem chip that enables mobile communication in disaster situations and mountainous areas, based on a mesh topology connection. The 1.3 cm by 1.3 cm chip only contains functions that are needed for satellite communication. The institute has finished a test through satellites before transferring technology to private companies.

Star topology reduces the impact of a transmission line failure by independently connecting each host to the hub. The failure of a transmission line linking any host to the hub will result in the isolation of that host from all others. In a mesh network, infrastructure nodes connect directly, dynamically and non-hierarchically to as many other nodes as possible and cooperate with one another.

Mesh networks dynamically self-organize and self-configure, which can reduce installation overhead, but mesh topology requires additional equipment. The Electronics and Telecommunications Research Institute (ETRI) said that it has developed a small ASIC chip that combines signal transmission and reception while using mesh topology.

"We will contribute to the improvement of people's convenience and quality of life through the commercialization of satellite communications," ETRI's radio technology research team head Byun Woo-jin said in a statement on February 9. Through technology transfer, the institute hopes to enhance the competitiveness of domestic firms so that they can compete with foreign companies in the industry.

The institute said its technology can be used in disaster sites and military communication networks, unlike conventional station-based mobile communications. The delay time of a star topology network connection was 0.5 seconds. ETRI's mesh topology chip halved the signal delivery time to 0.25 seconds. The number of channels that can send and receive different signals at the same time has increased to 32.