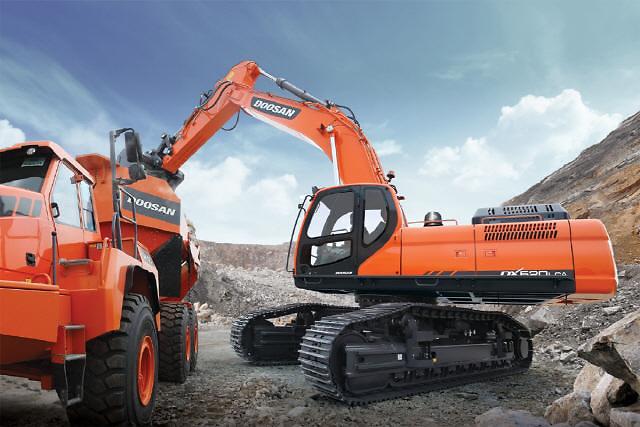 SEOUL -- South Korea's Hyundai shipbuilding group acquired Doosan Infracore, a major construction equipment maker that has been up for sale, faute de mieux, as part of efforts by its debt-stricken parent company to secure liquidity in return for a bailout loan from creditors. The deal would lead to the creation of a dominant player in South Korea's construction equipment market.

In a regulatory filing on February 5, Hyundai Heavy Industries Holdings said that its consortium has signed a contract to acquire a 34.97 percent stake in Doosan Infracore for 850 billion won ($756 million). When the shipbuilding group  closes the deal in the third quarter of 2021, Hyundai Construction Equipment (HCE) would become the world's seventh-largest construction equipment maker.

"By acquiring Doosan Infracore, a top domestic construction machinery maker, the Hyundai Heavy Industries Group has formed a portfolio focusing on hat focuses on key industries such as shipbuilding, oil refining and construction machinery," said Hyundai Heavy Industries Holdings chairman Kwon Oh-gap. "We will support investment in future technologies so that the two companies can secure a top position in the global market."

With rapid advances in sensor and computer technologies, there have been growing demands for autonomous equipment at warehouses, distribution centers and construction sites. HCE, which develops technology for unmanned forklifts, has teamed up with Trimble, an American software company, and SK Telecom to develop a 5G "smart construction" platform by using big data and artificial intelligence that would enable autonomous operation and remote control of construction equipment to improve efficiency and reduce dangers at construction sites.

Doosan Infracore has teamed up with LGU+, the third-largest mobile carrier, to develop self-driving construction machines using a 5G communication network, drones, and ultra-low latency video transmission technology. Autonomous machines would transmit the 3D image of construction sites photographed by a drone to the server in real-time and automatically calculates the workload.

In May 2020, Doosan Infracore released a cloud-based construction management solution as the first step to commercialize Concept-X, an unmanned control tower solution that manages the whole process of construction, and vowed to step up the commercialization of its teleoperation technology and a telematics service that remotely monitors construction machines based on information and communication technology, as well as a 3D machine guidance system that could be combined with AI technologies to develop self-driving excavators.