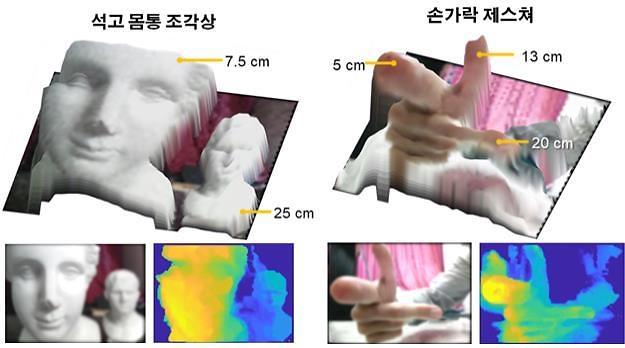 SEOUL -- A light field camera captures information about the light field emanating from a scene and the direction that the light rays are traveling in space. It has attracted much attention with a simple configuration without external light sources or additional cameras, often comprising a single objective lens, microlens arrays and a complementary metal-oxide-semiconductor image sensor.

Such a simple configuration samples all the spatial and directional 4D data without focusing on a specific object under single exposure. The captured data are reconstructed for depth refocusing, sub‐aperture imaging, and 3D depth map. However, camera miniaturization, cost-effectiveness and image contrast enhancement are still in need of practical applications.

Conventional microlens arrays often deliver low contrast imaging due to the optical crosstalk caused by the incident light leakage between adjacent microlenses. perfect optical absorbers such as metal-insulator-metal plasmonic structures or nanofilms have been often applied for an optical filter, photovoltaic, or solar energy applications, however, not yet for imaging applications.

"We have developed a source technology that produces ultrathin high-resolution light field cameras," Jeong said. "It can be used in various fields such as medical endoscopes, virtual reality and augmented reality cameras," he said, adding it is the thinnest light field camera ever developed.