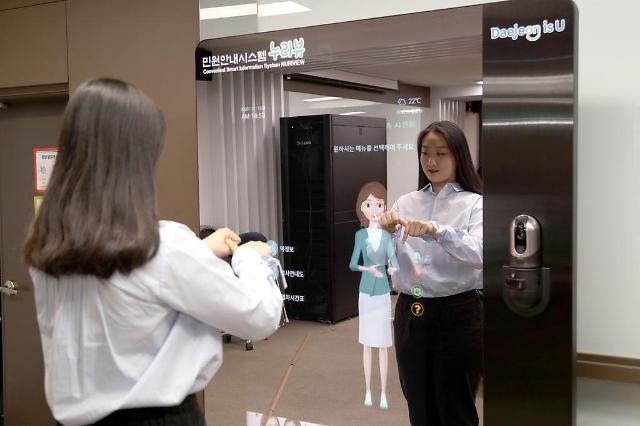 Daejeon said in a statement that the operation of "Nuriview," the AI-based digital mirror kiosk, will begin on February 3. Kiosks will be deployed at public places including the city hall and subway stations with a large moving population.

The kiosk equipped with a camera and sensors detects the movement of hands to recognize sign languages. It will communicate with citizens using sound, displaying text on the digital mirror. A computer graphic image avatar model uses sign languages. Citizens can use the kiosk in a similar way to smartphones by touching the semi-transparent magic mirror display.

"We will continue to roll out administrative actions to increase the disabled's access to information using the latest technology," Daejeon Mayor Heo Tae-jeong was quoted as saying. Nuriview will help citizens gain access to services such as the reissuing of passports and a digital guidebook. At subway stations, the kiosks will display timetables for trains and provide a charging service for electric wheelchairs.