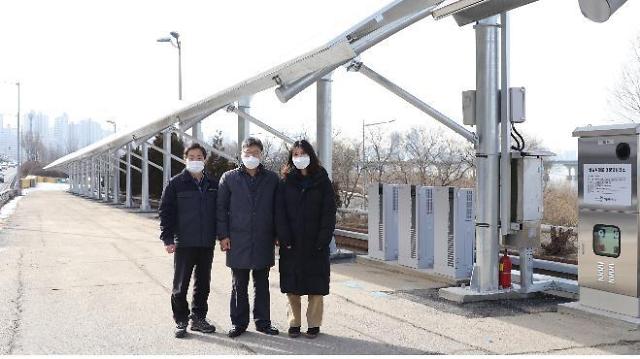 SEOUL -- A public power company operated by Seoul City has built a 12 kilowatt-hour-class solar power plant on an idle space next to an urban expressway. The power plant is part of the capital city's test to turn city infrastructure into eco-friendly power generation venues designed to reduce greenhouse gas emissions and save space.

Seoul Energy Corporation said in a statement on January 15 that it has built a solar power plant on Olympic-daero, an eight-lane expressway that interconnects the capital city's southern districts. The idle space was part of the expressway when it opened in 1986 but it was left without being used after the expressway slightly changed its course over time.

"We have used in idle space where ordinary vehicles cannot access. We will continue to development of urban solar power generation models," a Seoul Energy Corporation official was quoted as saying. The 12 kilowatt-hour-class power plant can annually generate electricity for 33 households.

In June last year, the capital city has finished the construction of a noise barrier tunnel clas in solar panels on an eastern urban highway through a two-year project. The solar power plant designed to provide electricity for 300 households is 479 meters long (0.3 miles). It is the world's first noise barrier that also works as a solar power plant.

To make the city greener, Seoul also provides subsidies to support building and house owners who wish to install solar power panels on the rooftops and walls. The city said that it plans to build more urban-type solar power plants to create more than one gigawatt of electricity, equivalent to that of a one gigawatt-class nuclear power plant by 2022.