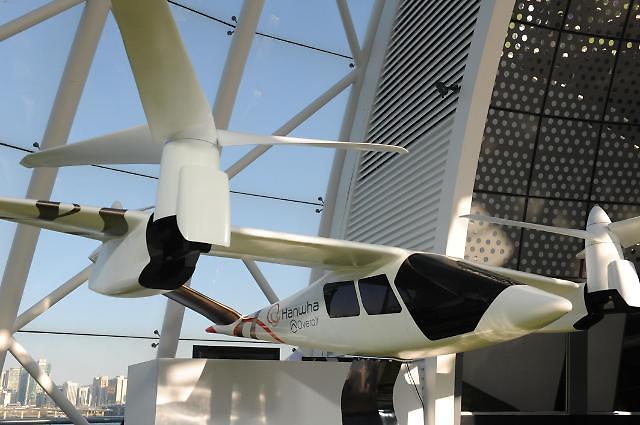 The mock-up of Butterfly from Hanwha Systems is on display at a public event in Seoul on November 11. [Yonhap News Photo]

SEOUL -- A state-run flight test center in South Korea's southern coastal town of Goheung was designated by a public-private consultative body called "Urban Air Mobility Team Korea" as a testbed for drone taxis that will be commercialized in 2025.

Urban air mobility (UAM) is an ecosystem covering personal air vehicles (PAVs) and infrastructure such as a new navigation system, take-off and landing fields and charging technologies. PAVs or flying cars are emerging as a future system of travel to avoid traffic jams on urban roads. A public-private consultative body called UAM Team Korea was launched in June.

At the first UAM Team Korea conference on December 29, participants agreed to establish a testbed at the state flight test center in Goheung, according to the Ministry of Land, Infrastructure and Transport. Construction will begin sometime in 2021. Some 40 companies, research groups and state bodies are involved in UAM Team Korea.

The ministry called for joint efforts to work out a final roadmap in March next year and said that South Korea would seek cooperation with NASA to exchange various information related to UAM. South Korea aims to commercialize drone taxis in 2025 and autonomous flights in 2035.