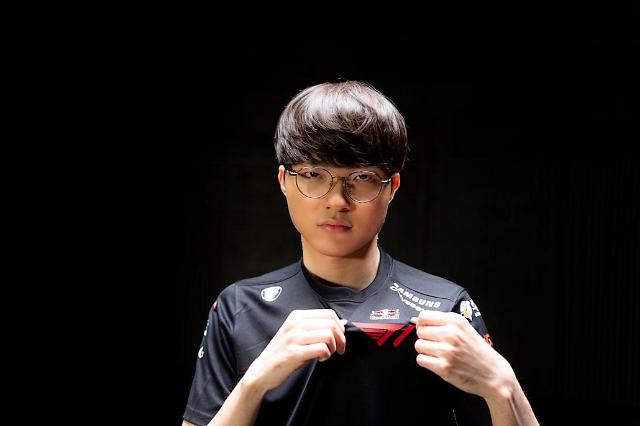 SEOUL -- Lee Sang-hyeok, a professional League of Legends player better known by his in-game name Faker, welcomed the partnership between his e-sports team, SK Telecom T1, and Red Bull, an Austrian energy drink company known for the sponsorship of sporting events and teams, as he and colleagues can use a high-tech training center in Santa Monica, California.

Red Bull and T1 forged a multi-year partnership to collaborate strategically throughout e-sports such as content creation and events. T1 said the partnership would allow team members to utilize the world's best human resources and facilities and receive global level physical guidance and support.

"I was surprised to hear about T1's partnership with Red Bull that I used to drink often, and I'm very happy with it," the 24-year-old, renowned for his high mechanical skill and extremely versatile champion pool, said in a Korean-language post published on Red Bull's website. "Pro gamers enjoy drinking energy drinks during practice and before games, so this partnership will be welcomed by all players in (my) club."

In February, Lee, picked up by SKT in 2013, renewed his three-year contract on the condition that he would participate in management at the end of his career as a professional player. He is the first player to have reached 1,000 kills in the League of Legends (LOL) Champions Korea (LCK).

T1 players will receive "a global level of physical coaching and various support," Red Bull said, adding T1 can use player performance centers in Austria and Santa Monica, which have excellent equipment and personnel for athletes such as Max Verstappen, a Belgian-Dutch racing driver in Formula One, and Trent Alexander-Arnold, a Premier League player, to train the best for their competition.

SKT has been active in e-sports and game markets. In October 2019, the mobile carrier established a joint venture with Comcast, a U.S. media entertainment group, and Highland Capital Management, a Dallas-based alternative investment management firm, to find new business models for e-sports. In March this year, SKT partnered with Singtel of Singapore and AIS of Thailand to establish a regional joint venture to develop new gaming-related revenue streams.