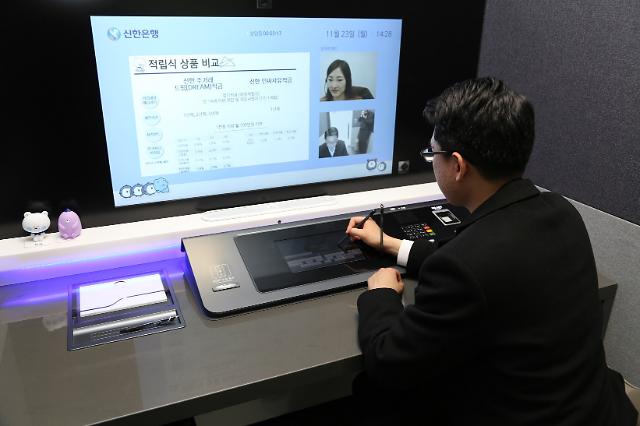 SEOUL -- An innovative counter booth installed with a video consultation system, a palm vein recognition device and an identification card scanner made its debut at a major South Korean commercial bank to provide a financial service for consulting on loans or opening new accounts. It will help improve financial accessibility for the elderly and other vulnerable groups.

It's premature to determine the success or failure of an experimental financial service introduced at a Shinhan Bank branch in central Seoul on November 24. The counter called "Digitact Branch" helps customers handle their work with dedicated staff using a screen, a camera for video counseling, a keypad, a palm vein recognition device and an ID card scanner. "Digitact" is a combination of digital and contact.

After a pilot operation, Shinhan Bank hopes to apply Digitact Branch to various channels and expand the scope of work in 2021. The Shinhan financial group has aggressively pushed for digital transformation in a country that has expanded the use of biometrics technology from airports to convenience stores. Physical characteristics such as unique patterns of humans' iris are used as a cybernetic alternative to physical keys.

Shinhan Card has introduced a simple offline payment service using biometrics technology to recognize the face of customers. Payments will be automatically made just by asking customers to stare at the payment system's camera installed in counters. In September, Shinhan Bank partnered SK Telecom to establish a quantum random number-based security system.