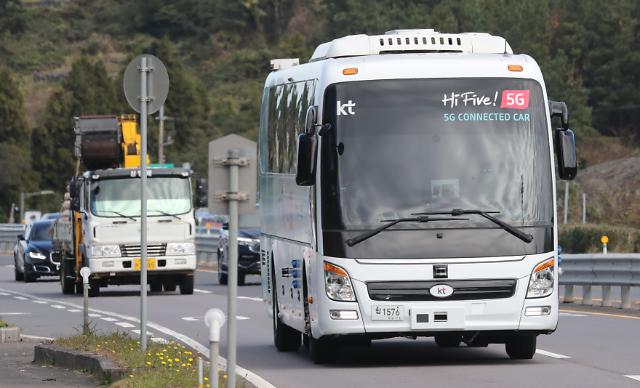 SEOUL -- The southern resort island of Jeju was selected for a state project to operate a test field for autonomous vehicles in an effort to check the efficacy and operability of smart shuttles in urban commercial areas and tourist hot spots.

Jeju with average annual visitors of more than 15 million has a vast network of roads that connect various types of areas including cities, mountains, small towns and tourist hot spots scattered across the island. The island has an advanced network of electric vehicle charging infrastructure with more than 15,000 chargers, making it ideal for testing EVs and smart vehicles.

The Ministry of Land, Infrastructure and Transport selected an area covering 40 kilometers (24.8 miles) from an airport in the northern part of Jeju to Jungmoon, a famous tourist hot spot, as one of South Korea's six test fields for autonomous vehicles. Jeju said in a statement on November 24 that it would deploy five smart limousine shuttle buses in the first year and add more in the second year for a commercial service during the second half of 2021.

The test operation will be based on a cooperative intelligent transport system (C-ITS) which was showcased in Jeju in June this year. The system provides real-time information such as traffic conditions, sudden stops and fallen objects so that individual vehicles can share data and prevent traffic accidents.

Five other test fields included areas in Seoul, the central city of Sejong and the southeastern city of Daegu. Sejong, the de facto administrative capital of South Korea, has a vast smart vehicle infrastructure that was built in at the early stages of city development. The infrastructure allows cars to communicate with on-road facilities such as traffic lights and a control tower.

Various autonomous technologies are being tested in Sejong. In May, Sejong revealed its plan to develop a blockchain-trusted platform for self-driving cars in a project led by the science ministry. Blockchain, a virtual ledger encryption technology, will prevent hackers from illegally cloning of autonomous vehicles' identities as well as hacking.