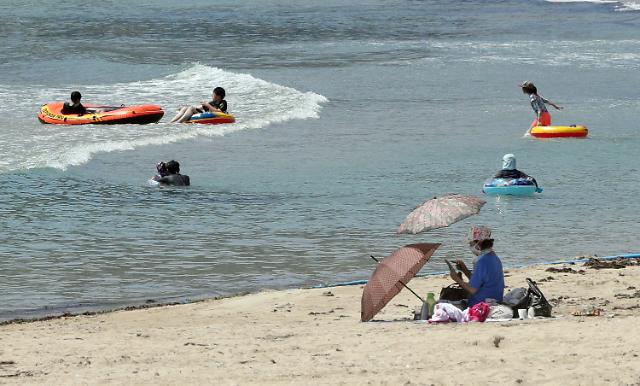 
SEOUL -- South Korean beaches for bathing and swimming have built their reputation as a perfect safe zone with no COVID-19 cases this summer by introducing various quarantine measures such as the mandatory use of masks, drones, wristbands, online congestion traffic lights and a reservation system.

South Korean bathing beaches opened in late June and shut down on August 23. Preliminary government data showed that some 26.8 million people visited 251 bathing beaches, compared to 67.67 million a year ago. Beach operators and government regulators should not be ashamed complimenting themselves because no COVID-19 cases were reported.

An administrative order was issued to ban nighttime drinking and eating at 21 major beaches. Violators were given a fine of three million won ($2,577). Based on big data and IT technology, an online traffic light service that sends signals in red, yellow and green was implemented to provide information about crowded beaches. Some big beaches regulated the permissible number of visitors by receiving reservations in advance.

A total of 8,500 police and local government officials were mobilized to conduct on-site guidance and nighttime crackdowns. Visitors were required to complete an electronic entry and exit list or a handwritten list of personal contact.

"Based on our advanced information and communication technology and mature reservation culture, we have adopted congested traffic lights and a pre-booking system to disperse visitors to beaches," said Vice Minister Park Jun-young of the Ministry of Oceans and Fisheries.

For on-site management, the ministry has worked with local governments to come up with fever checking and wristbands to address concerns among beach users and local merchants about the risk of COVID-19 infection. "As a result, no COVID-19 cases have occurred in bathing beaches," Park said.

The number of beach visitors fell sharply this year due to an unusually long rainy season caused by global climate change and concerns about a prolonged pandemic. Still, Park's office deserves self-applause as the proportion of people using large beaches has decreased from 86.0 percent last year to 75.5 percent this year, leading to a dispersion effect.

The mandatory use of masks was imposed by the operators of Haeundae, an urban beach in the southern port city of Busan, that received some 6.89 million visitors this summer.

In Wando, a bridge-connected island off South Korea's southwest coast, drones equipped with thermal imaging cameras flew above the beach to check the body temperature of visitors and see if people kept their distance. Visitors were given wristbands to show that they were screened and sanitized at checkpoints. Some other beaches benchmarked Wando's anti-epidemic solution.

Park's office said a pre-booking system would be commonplace at large beaches in the futue, along with a permanent ban on indiscriminate night drinking and eating at beaches.