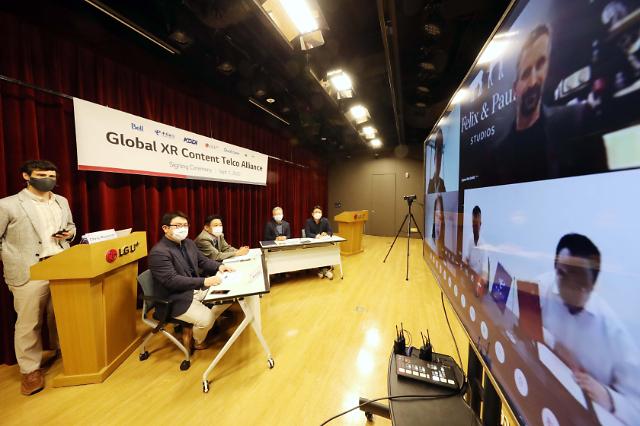 
SEOUL -- A three-dimensional virtual reality video series showing a spacewalk shot in real space at a space station will be released sequentially in November as the first content to be produced by an international 5G extended reality (XR) alliance formed by LG Uplus, a mobile carrier in South Korea, and other companies in the United States, Canada, Japan and China.

Felix & Paul Studios, a Canadian realistic content production company, will work with the National Aeronautics and Space Administration (NASA) and others to capture a video from the International Space Station (ISS), a modular space station in low Earth orbit, for the first time in 3D VR.

"Creating high-quality XR content requires a huge cost, and cost-effectiveness and technological maturity will be enhanced through the XR alliance," LGU+ FC division head Lee Sang-min told an online news conference. "We will quickly produce actual contents beyond the concept of simple partnership."

The alliance will select contents to be produced through regular meetings and expand the scope of realistic content to various fields such as performances and documentaries of sports stars while making new attempts by implementing two or more technologies at the same time or merging new technologies.

Mobile carriers in other countries will be admitted as members and production companies as partners. "Many mobile carriers and studios are seeking to join the alliance," Lee said, adding the alliance would expand collaboration with global companies to provide a unique experience for XR users.