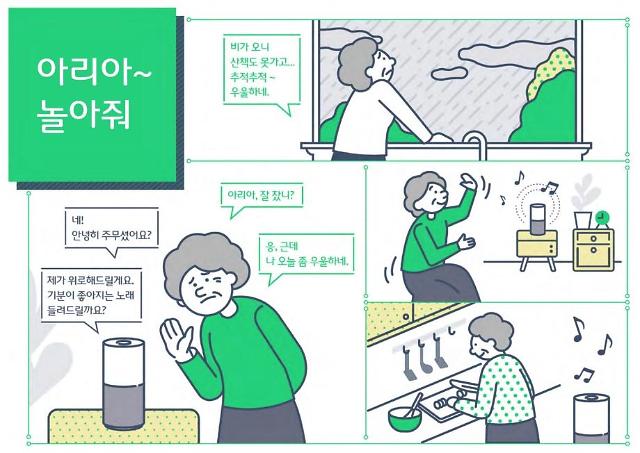 AI voice speakers are receiving greater attention in South Korea where the population is aging fast. More than 200,000 AI speakers are deployed at homes and offices across South Korea. As part of a government campaign to provide care services for elderlies, state and private companies provide AI speakers interlinked with Internet of Things (IoT) sensors.

A joint survey of 3,200 single elderlies, conducted by SK Telecom (SKT) and the Social Solidarity Economy Committee and Happy Connect, a social enterprise, found that AI voice assistant speaker-based care services increased the happiness of old people by seven percent and decreased the feeling of loneliness by four percent

Old people relieved their stress and loneliness by talking to AI speakers and asking them to play music. Mental exercises provided by Aria, an AI system for SKT's AI speaker platform, improved the mental health of old people. The memory improvement service provides simple games such as a twenty questions game or short stories that encourage listeners to think and memorize. AI speakers also provide verbal instructions for stretching exercises.

SKT's AI voice assistants embedded with an emergency call system allow users to call emergency services just by saying "Aria, help!" Between May 1, 2019 and July 6, 2020, a total of 439 emergency cases were reported using AI speakers, with 26 of them saved from critical conditions. The average age of those who asked for help was 75.

AI speakers were found to have improved self-efficacy and self-evaluation on a person's ability to complete a task or solve a problem. 56 percent of aged AI speaker users felt that robot assistants increase their self-efficacy. As they got familiar with robot assistants, old people were able to call relatives and friends more frequently and moved around more. The average daily travel distance has increased by 68 percent to 13.14 kilometers (8.1 miles) from 7.8 kilometers.

As of March this year, Seoul has deployed 75,000 IoT sensors at the homes of single elderlies. IoT sensors can detect temperature, humidity and movements in real-time, and Seoul plans to increase the number of IoT sensors for elderlies to 12,500 by 2022.

In 2019, the government adopted AI and big-data based social welfare services to find people left in blind spots of communities. Wonju, a provincial city some 85 kilometers east of Seoul, said on August 18 that it would deploy 200 "Pibo," a suitcase-sized humanoid care robot, to dementia care centers, social welfare centers and elderly homes to relieve the stress and loneliness of aged people. Pibo developed by Circulus, a domestic robot maker, can interact with people by recognizing facial expressions and engage in chats to tell stories based on news and social media.

Along with Ai speakers, smartphones have directly entered the lives of middle-aged and elderly people. Previously, many old people used smartphones just to make phone calls, take pictures and have a chat using a messenger app. Other services such as mobile shopping and banking were thought to be exclusive properties of younger generations.

However, a survey of 500 South Koreans aged over 50, conducted this year by LINA Foundation, showed that 38 percent used video content services such as YouTube and Netflix, 32 percent tried online food delivery services and 27 percent used online financial services for the first time.

The change in lifestyle was triggered by a COVID-19 pandemic. Instead of visiting offline stores, customers used online shopping to avoid contact with other people. Sales of Coupang, a South Korean version of Amazon, in May rose 13.5 percent from a year ago. School Food, a snack delivery franchise, saw first-half sales soaring 30 percent on-year.