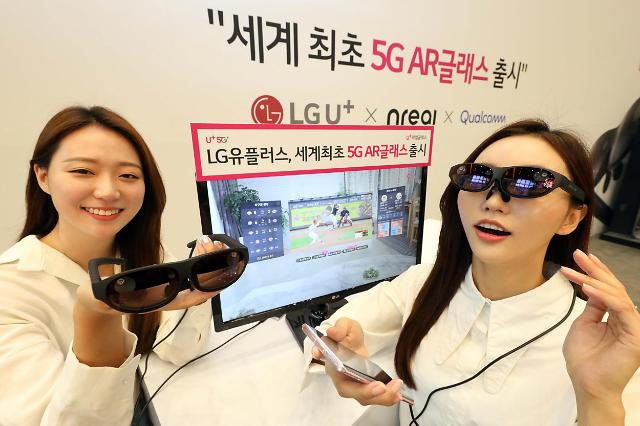 If a smartphone and AR glasses are connected via USB, users can enjoy 3D AR contents. The screen size can be extended up to 100 inches. The smartphone projects a virtual laser pointer on the screen, which can be used as a mouse cursor to control desired contents.

The device will support all apps available on the Android operating system and allow users to watch YouTube videos or multiple app screens at the same time.

In 2021, Nereal aims to launch a service that uses app manipulation with hand gestures. In the second half of this year, the company will release a system that allows up to 10 people in different spaces to gather in virtual conference rooms, in partnership with Spatial, an American startup that enables people to meet through augmented or virtual reality. Each individual can create an avatar and watch file materials or videos together.

"We wanted to lower our hurdles in the AR glass market with realistic price range and a lightweight of 88 grams," LGU+'s future device division head Song Dae-won said in trial performance. "If 5G services were focused on entertainment, we expect this U+Real Glass to provide a variety of experiences that will change real life."

LGU+ wants U+Real Glass to lead the popularization of AR as its use can be expanded to business-to-business (B2B) areas such as smart factories and telemedicine.

There is only one size, so users should change the nose support that fits the size of the face. Whenever users move their heads or walk, the screen looked shaky. The voice came from a speaker attached near the ear inside the glass. The ambient noise was not completely blocked.

Smartphones act as a mouse. It is a method of manipulating a smartphone like a mouse pointer by moving it around in the air. After turning on the screen and connecting it to Galaxy Note 20 via USB, a menu window opened in front of eyes where users can select multiple apps. The menu window is translucent, allowing visibility beyond it.