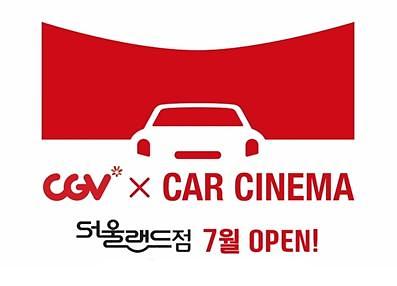 
SEOUL -- CGV, a leading cinema franchise operated by South Korea's entertainment giant CJ ENM, will open a drive-in cinema at a public amusement park in Seoul to help revitalize the domestic film industry that has been devastated by COVID-19.

South Korea's film industry that once reached 1.91 trillion won ($1.6 billion) suffered a crippling setback this year when the world was swept over by the COVID-19 pandemic. Sales in the first half of this year fell 70.6 percent on-year to 27.3 billion won ($22.8 million) due to a nationwide social distancing campaign. The number of moviegoers in the first half of this year was 32.4 million, down 70.3 percent from a year ago.

Those who did not visit theaters have watched films and video content at home using over-the-top and internet protocol television services. Many film producers and distributors have postponed the release of new movies. To attract movie fans who are thirsty for new movies, CGV brought an old trend of drive-in theaters back to life. The cinema franchise said in a statement on July 22 that it has partnered with Seoul Land, an amusement park run by Seoul City, to open "CGV X CAR CINEMA."

For booking, CGV adopted a non-contact method using smartphone apps and websites. Seoul Land provided a special location for CGV X CAR CINEMA that can house some 100 vehicles at a time. About 22,000 won will be charged per vehicle and the first film to be screened is "Peninsula," a zombie blockbuster film created by Yeon Sang-ho.

The drive-in cinema became a trend in the early 2000s. Backed by young couples who want unique places to date, more than 60 car cinemas used to be run across the country. However, outdoor theaters have gradually disappeared.

In June, the western port city of Incheon benchmarked a drive-thru COVID-19 screening method to screen popular Hollywood films such as "School of Rock" and "Begin Again" as well as South Korean films including "Along with the Gods: The Two Worlds" and "Miss Granny" at an idle space in its port area every weekend until October.