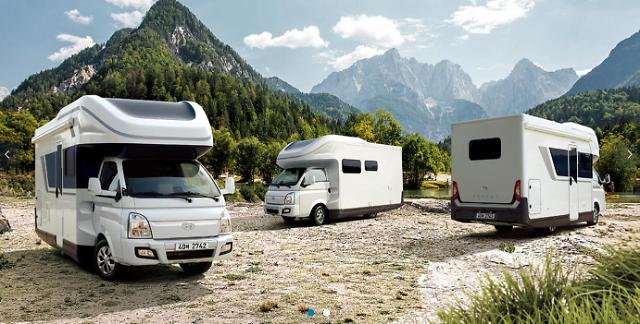 SEOUL -- The COVID-19 pandemic has affected South Korea's leisure activities. Vacationers who cannot visit foreign countries favor camping instead of spending holidays in crowded urban areas. Popular camping sites have been fully booked and the remodeling of old cars into camping vehicles has gained popularity thanks to eased government regulations.

The government's regulatory sandbox exempts regulations for a certain period of time so that companies can develop and demonstrate new technologies. The Ministry of Land, Infrastructure and Transport eased regulations in May to allow special-purpose vehicles to be converted into camping vans without the need of changing their classification.

According to government data released on July 20, 3,214 trucks were converted into camping vans in the first half of this year, compared to 1,119 a year ago. The remodeling of camping vehicles gained popularity this year as people go outdoors while maintaining their social distancing.

There are more than four million casual campers. The domestic camping market stood at more than two trillion won ($16.6 billion) last year, according to the Camping Outdoor Agency, a private agency. Previously, campers had favored vans over trucks because trucks were not allowed to carry a modular camper compartment on its cargo bed while vans could easily be remodeled into a living space.

"Uljin's beach used to be totally empty because nobody came here before. But now, there are so many people that villagers feel very uncomfortable," Song Eui-han, a 37-year-old writer living in the eastern seaside village of Uljin, told Aju News. Song said that many campers drive camper vans or pull a camping caravan.