Home-made transmissions earn chance of being used for K2 tanks 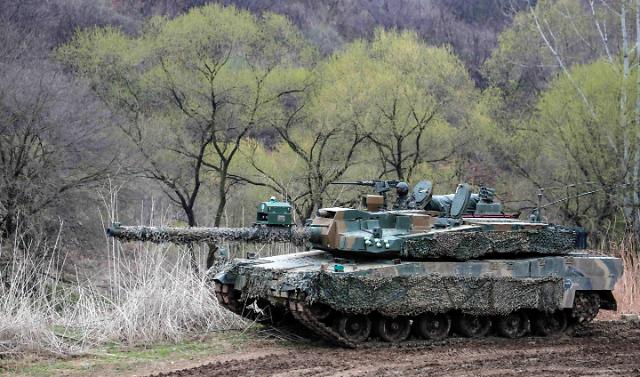 [Courtesy of the Ministry of National Defense]

SEOUL -- Home-made transmissions can be used for South Korea's main battle tank after a defense ministry-controlled state body in charge of arms acquisition unveiled revised standards on durability defects, paving the way for Hyundai Rotem to go ahead with the third mass-production of K2 Black Panther tanks this year.

The Defense Acquisition Program Administration (DAPA) said that it would apply revised standards fairly to the screening of transmissions developed by a South Korean company to dispel concerns about the interpretation of defects. "We will make efforts to ensure that the third mass-production of K2 tanks can be launched within this year," Kim Ki-taek, head of DAPA's division in charge of tanks and armored vehicles, said in a statement.

The revision will serve as a "starting point for the complete localization of K2 tank's power pack," Kim said. A technical advisory committee composed of experts has produced an objective and fair revision, DAPA said, adding the definition of durability defects related to locally-built transmissions has been added, with the method of re-examination specified in detail.

There was no definition of durability defects in DAPA's previous defense standards. When a failure occurred during the earlier test of durability, DAPA judged locally-built transmissions were inappropriate. However, developers insisted defects were not serious. In revised standards, durability defects were defined as a case in which the basic function of transmissions is lost or the test can no longer be carried out due to serious performance degradation.

DAPA refuted alleged favoritism, saying it did not ease inspection standards to use a home-made power pack. The defense body would recognize faults affecting basic transmission functions as defects.