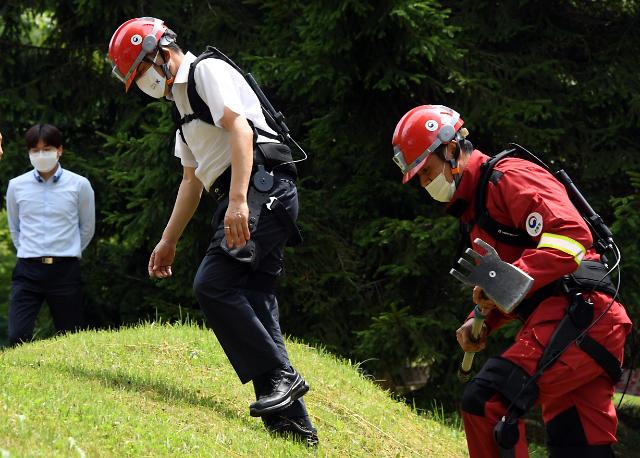 SEOUL -- A smart helmet equipped with sensors, a camera and communication devices will be combined with a wearable exoskeleton robot to help emergency personnel put out fires and rescue people stranded deep in the mountains. Rescuers can communicate and share information using the smart helmet in real time.

In a showcase on July 7 at an arboretum, about 100 kilometers (62 miles) south of Seoul, the Korea Forest Service (KFS), a governing body, unveiled a smart safety helmet and a wearable exoskeleton robot that would help emergency workers effectively carry out operations in the mountains. Prototypes will be deployed in October this year.

"Robotics technology can be utilized in many fields including the forestry industry and disaster situations," KFS head Park Jong-ho said in a statement. Emergency workers have participated in the development of the new wearable devices to share opinions.

The smart helmet can relay live video feeds of emergency sites while creating a network. The wearable exoskeleton robot worn on legs helps rescuers maintain their posture while slowing down the rate of their stamina loss.

According to a government study, safety accident cases at forest work sites are 3.8 times more frequent than that of urban worksites. To prevent casualties, it is imperative to quickly dispatch emergency personnel and carry the wounded to places where rescue helicopters can reach. Safety accidents involving hikers are also frequent. There are about 1,500 safety accidents involving hikers every year. Emergency teams have adopted drones and a specialized smartphone app system using location data to effectively locate stranded or injured hikers. The control tower can track rescuers in real time. 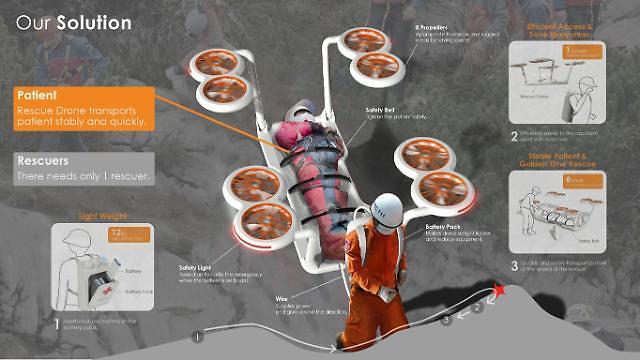 Supportive devices for emergency personnel are actively researched. In February this year, a concept design for a rescue drone created by researchers at the Ulsan National Institute of Science and Technology (UNIST) was given an iF Product Design Award, a prestigious international design award.

The drone that keeps itself balanced using gyroscopes is connected to a battery pack worn by a rescuer. UNIST said the drone would not be very expensive because it does not require advanced technologies and sensors. The rescuer guides the flying bed with a leash, just like walking a dog.