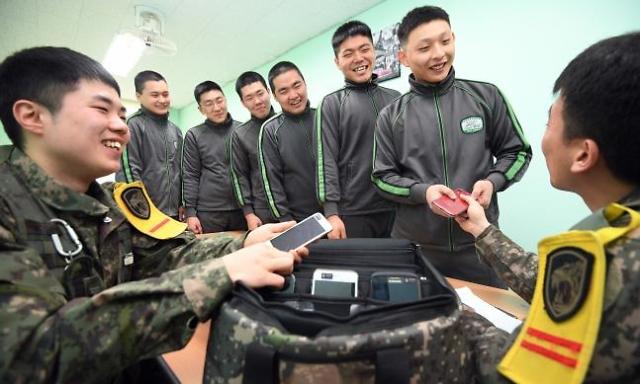 
SEOUL -- South Korean soldiers can freely use smartphones at barracks after work hours after a 15-month test period that began in April 2019. Previously, only officers used smartphones while enlisted soldiers were allowed to use payphones if they wish to contact relatives or friends.

The Defense Ministry said that from July 1, conscripted soldiers can use smartphones from 6:00 p.m. to 9:00 p.m. during weekdays and from 8:30 a.m. to 9:00 p.m. on weekends. The ministry lifted a ban on smartphones to create a new environment at barracks. During the rest period, smartphones played a key role in relieving the stress of soldiers who had to stay in their camps due to the COVID-19 pandemic.

All able-bodied South Korean men aged more than 18 years old must complete their mandatory military duty -- 18 months in the Army or Marine Corps, 20 months in the Navy and 21 months at the Air Force. Previously, soldiers have spent time in their barracks reading books or watching TV. Some soldiers honed physical abilities at the gym or by engaging in sports games.

A survey of 6,907 soldiers showed that 61.6 percent actively communicated with others using smartphone social media and other features while 16.2 percent searched for information to study. Some 13 percent used video content services and 9.3 percent played games. There were no cases of information or security leaks during the test period, the defense ministry said, adding it would take stern action against violations. The defense ministry said it will develop measures to prevent smartphone-related problems such as digital sexual violence and illegal gambling.