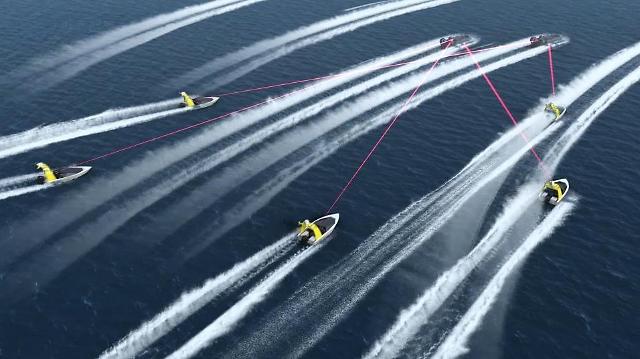 Hanwha Systems said in a statement on Monday that it has participated in a project led by the Agency for Defense Development, South Korea's arms research body, to develop clustered unmanned surface vehicle (USV) technology and the management system by 2024.

Clustered USV technology, also known as clustered drone technology, harnesses a group of USVs via a wireless network to have robots operate in unison. Unmanned aerial vehicles (UAVs) are operated in clusters by some countries including the United States for surveillance and strike designated targets including humans, moving vehicles and facilities.

When the development is finished, a group of artificial intelligence (AI)-based USV will be deployed to coastal areas of South Korea for patrol and counteract against invading forces. The USVs that are connected via wireless networks can also cooperatively search for naval mines placed in water to destroy ships or submarines that come nearby.

The military contractor will establish various demonstration platforms to test the grouped network of USVs and their AI algorithm. "We will throw in all our effort "We will focus all our capabilities on contributing to the smart naval strategy that our navy is aiming for and making the clustered unmanned boat system a global technology," Hanwha Systems CEO Kim Yeon-chul was quoted as saying.

LIG Nex 1 showcased a prototype of its latest series of USV Hae Gum (Sea Sword), an eight-meter-long monohull autonomous boat equipped with radar, special cameras, communication equipment and a cargo module. It also has a machinegun and AT-1K Raybolt anti-tank missiles mounted on a weapon station that can be remotely controlled.

The USV was designed to carry out surveillance and reconnaissance operations to monitor other ships that are engaged in illegal activities such as unregulated fishing, smuggling and human trafficking.