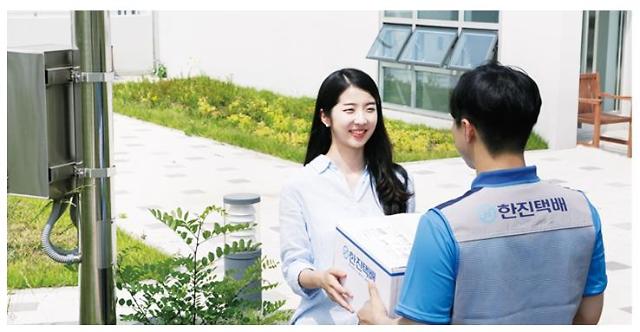 SEOUL -- Korean Air, the top flag carrier in South Korea, is reeling from financial woes that prompted state lenders to extend special loans, but its parent group is adamant in expanding its logistics wing with an extra investment to build a mega logistics hub installed with advanced equipment such as a 3D automatic scanner.

Hanjin, the transportation and logistics service wing of South Korea's Hanjin Group, signed a memorandum of understanding with Daejeon City on the construction of a logistics hub that would cost some 285 billion won ($235 million) by early 2023.

About 470 cargo trucks will be able to work at the same time at the Daejeon logistics center installed with advanced equipment such as automatic sorting machines and 3D automatic scanners. Hanjin aims to corner a 20 percent share in the domestic delivery market by 2023 by using the mega-hub to strengthen the system of collecting and processing parcels scattered in major areas.

The daily average number of parcels that can be processed will be expanded from 1.7 million boxes to 2.6 million boxes, and Hanjin will push for the expansion of delivery terminals across South Korea where competition is getting fierce among logistics companies.

Technologies including AI and big data are adopted by global logistics companies to increase work efficiency and reduce costs. AI can use big data to predict and manage parcel handling systems in real time and optimize delivery routes. Such technologies can also provide transparency to the entire logistics chain and streamline delivery.

The speed of delivery has become the most important aspect of South Korea. CJ Logistics provided deliverymen with an AI-based assistant solution for the easy control of parcel management.