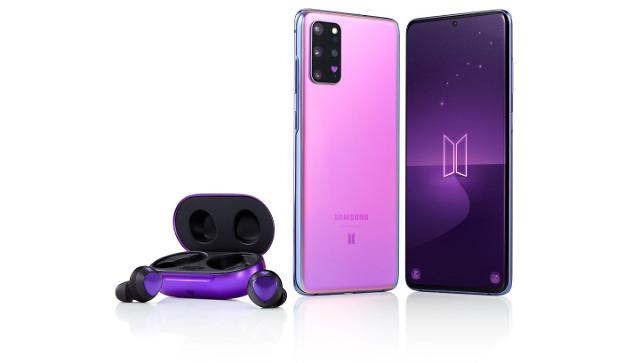 SEOUL -- Samsung Electronics will release a BTS-themed special edition smartphone adorned with the logo and iconic color of the K-pop sensation in July.

The South Korean smartphone maker said in a statement on Monday that "Galaxy S20+ BTS Edition" will hit the shelves in some 50 countries including South Korea, the United States and Europe on July 9. ARMY, the international fan club of BTS, celebrates on July 9 the day when the global fandom gained its name in 2013.

The BTS-themed phone bears the color of purple that has become the iconic color of the seven-member band. The phone which has a BTS logo and a purple heart on its rear face will come with BTS posters and decorative stickers. The price of Galaxy S20+ BTS edition, which will be released in 5G and 4G variants, is 1,397,000 won ($1,155).

Along with the special edition phone, Samsung has also prepared "Galaxy Buds+ BTS Edition," a pair of wireless earphones decorated with the purple color of BTS. A package that includes the BTS-themed smartphone and earphones will be released as a limited edition for 1,584,000 won.

"We wish that BTS editions of Galaxy S20+ and Galaxy Buds bring new happiness and vitality to the global consumers' everyday lives," a Samsung official was quoted as saying.