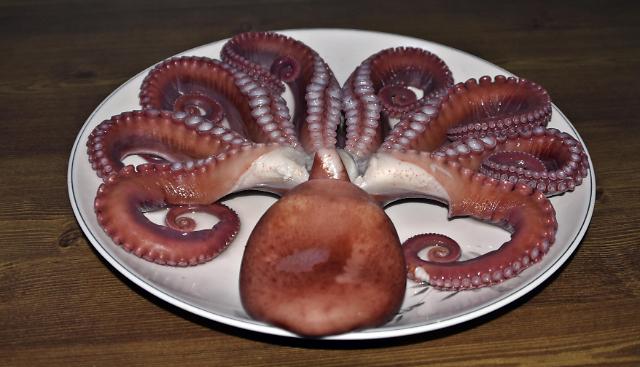 
SEOUL -- A state research body in South Korea claimed to have unraveled the first clue of farming techniques for the giant Pacific octopus, which is considered impossible to breed. Octopus larvae grew to the size of 23 millimeters and died in the "bottom" stage 99 days after they hatched.

The spatial distribution of the giant Pacific octopus (Enteroctopus dofleini) includes the coastal North Pacific. Giant octopuses caught off the east coast of the Korean peninsula usually grow to 30 to 50 kilograms, but overfishing has rapidly reduced resources. Researchers found that giant octopuses weigh only about 40 grams until a year after hatching and grow to 1 to 2 kg in two years and 10 to 15 kg in three years.

Because most of the octopus larvae die in the final stage of floating in the water before living on the floor, researchers have tried to overcome the final-stage hurdle. A mother octopus takes care of the eggs for six to seven months and ends her life right after the eggs hatch.

The state-run National Institute of Fisheries Science said it has improved a breeding system to thoroughly nourish octopuses and managed stress. The institute helped octopus larvae adapt to their bottom life by selecting more than 20 different kinds of food that they would prefer.