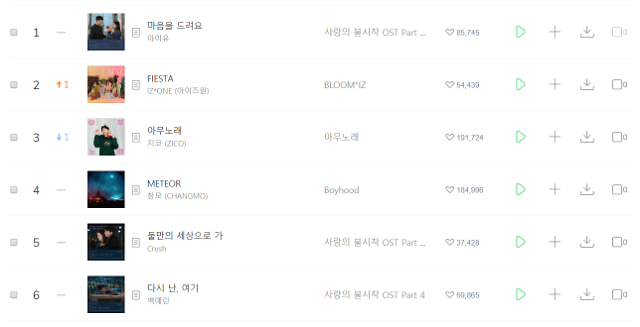 
SEOUL -- Melon, one of South Korea's most popular online music services, will pull the plug on its controversial real-time song chart feature to stop excessive competition for rankings and offer a more diverse range of music to users. The change will be made during the first half of this year.

The online music service, operated by South Korea's web service giant Kakao, said in a statement on Tuesday that it would stop the service of an hourly real-time song chart and adopt a new chart to be refreshed every 24 hours. Instead of its real-time song chart, Melon will provide an alternate popularity chart that does not rank songs by the number of times they were streamed or downloaded.

Melon also plans to change its iconic top 100 popular song chart by adopting a random song play method as the default music play style. The top 100 song chart has been the killer content of Melon for many years as it offered an up-to-date list of popular music for listeners who wish to enjoy trendy songs.

"We will spend enough time listening and thinking as millions of users, music ecosystem workers and rights holders have various opinions and perspectives," a Kakao official was quoted as saying.

Real-time song chart services provided by various online music companies have been at the center of controversy for more than a decade because of Sajaegi, a K-pop term for album hoarding, and calculated streaming of songs.

There have been allegations about Sajaegi by some South Korean artists and labels to manipulate music chart rankings. Viral marketing companies are suspected of using thousands of smartphones to stream a client's song in a tactful method. Fans found unfamiliar movements in real-time song charts after online music services started providing graphs showing the movements of songs in recent years.

Normally, a popular song will move up in a gentle upward curve to eventually reach the top of song charts. Songs suspected of chart manipulation literally skyrocket up the chart, drawing almost straight lines pointing up in sharp angles.

Suspicions about chart fixing grew when music services categorized top trending songs by ages. Sometimes top-ranked hip-hop and pop-ballad songs that are suspected of chart manipulation are soaring through charts favored by those who would normally listen to old pop songs and Trot, an old-style ballad music genre which is popular among old generations in South Korea and Japan.

Sajaegi surfaced as a major issue after Park Kyung, a member of K-pop boy band Block B, tweeted on November 24 last year, "I'd like to do some music hoarding like these people." He revealed the names of Vibe, an R&B duo of Yoon Min-soo and Ryu Jae-hyun, and five other singers. Vibe and some other artists named took legal action against Park for defamation.

Several other musicians have sided with Park. Jin, a BTS member, set forth his opinion during the Mnet Asian Music Awards (MAMA) on December 4, "Instead of negative methods, how about making good music in a more honest way. I hope the era will come when everyone makes and listens to good music."

Sajaegi is punishable by the Music Industry Promotion Act. Violators can receive a maximum of two years in jail or a maximum fine of 20 million won ($16,314). However, it is often positioned in a gray zone with no specific regulations. An investigation into chart manipulation is almost impossible because suspected companies carry out discreet methods mainly at workshops located in China and Southeast Asia. Also, streaming a certain song over and over again is not illegal.

In 2013, large entertainment companies filed complaints with the prosecution against companies suspected of hoarding music records, but they were not indicted due to insufficient evidence. In 2018, the culture ministry investigated singers suspected of chart manipulation only to conclude that it was difficult to see if they hoarded songs.