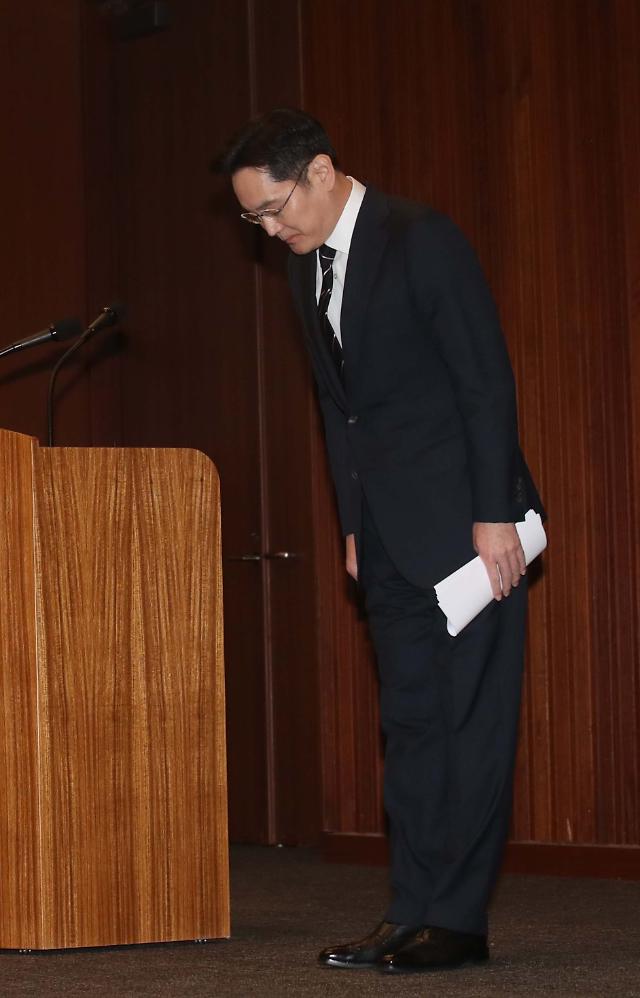 Jay Y. Lee, the de facto leader of Samsung Group, lowers his head in a gesture of apology during a new conference at the Seoul head office of Samsung Electronics on May 6.[Yonhap News Photo]


SEOUL -- The de facto leader of South Korea's top conglomerate, Samsung, apologized for public reprimands over the transfer of power from his bedridden father and made a clear-cut promise that he would never hand over group-wide managerial command to his children.

The apology followed recommendations by an independent committee, which was set up after the Supreme Court asked an appeals court to review a suspended jail term which was handed down to Lee on bribery charges stemming from a corruption scandal involving South Korea's jailed ex-president Park Geun-hye.

"I'm not going to hand over the company's management rights to my children," Lee declared in a press conference on Wednesday at the Seoul head office of Samsung Electronics. He conceded that Samsung's failure to comply with laws and ethics in the process of growing into a top global company has caused public disappointment and concern.

Lee was released from prison in February 2018, when the appeals court sentenced him to two years and six months in prison with a stay of execution for four years, reversing the lower court's ruling that bribes were used to ensure the smooth transfer of group leadership. However, the supreme court ordered retrial in August 2019 and the case is still pending due to a procedural dispute.

"I will never do anything against law," Lee said, vowing to focus solely on enhancing corporate value and stop relying on expediency or doing anything unethical.

The Samsung group faces an uncertain business environment due to fierce competition, Lee said, adding "the highest level of management with expertise and insight" can ensure the survival of Samsung Electronics, the world's largest smartphone and microchip producer.

"This is my sense of urgency," Lee said, adding he feels responsible for Samsung's distorted labor-management culture that has not allowed free union activities.

Lee could be sent back to prison depending on the appeals court's review and Samsung could suffer from a leadership vacuum. He has made crucial decisions on strategic issues since his father was hospitalized in May 2014 after being hit by a stroke.

The corruption scandal involving Park and her crony fanned public sentiment against corporate donations, which have long been a controversial issue in South Korea due to concern about collusive ties between businessmen and politicians.

Park was on trial on multiple charges including bribery, abuse of authority, coercion and leaking government secrets. She was accused of abusing her status and power to solicit bribes from top conglomerates, although she claimed businessmen have voluntarily donated money.