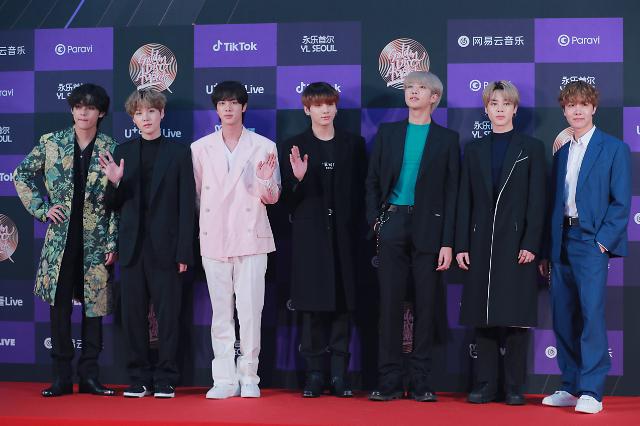 SEOUL -- In an effort to prevent cross-contamination of band members, staff and fans at concert venues, K-pop band BTS has suspended this year's world tour schedule. The seven-member band will announce a new tour schedule when the global COVID-19 pandemic situation is controlled.

"The decision has been made to completely reschedule BTS MAP OF THE SOUL TOUR, originally scheduled to begin in April, 2020," Big Hit Entertainment, the band's agency, said in a statement uploaded onto social media on Tuesday. "The decision to reschedule the tour was made with the health and safety of our artists and fans in foremost consideration," the agency explained.

"Due to the nature of BTS concerts involving travel by thousands of international fans no matter where the performances are held, it is also difficult to resume the tour with the current strict restrictions on cross-border movement still in place," the agency said, adding it is impossible at this point to predict when BTS' first performance of the world concert tour would be able to begin.

According to Big Hit, the agency will provide a new tour schedule to fans as soon as things become clear when the tour can begin. Meanwhile, BTS and its agency will work to create new ways so that the band can engage with fans and respond to the "New Normal". Currently, band members are actively communicating with fans on WeVerse, a smartphone social media app operated by Big Hit.

In February, BTS canceled its Seoul concert, the first leg of this year's "BTS MAP FO THE SOUL TOUR," because of heightened concerns over the global spread of the highly contagious novel coronavirus. In March, the band has called off its European and North American legs of its world tour.