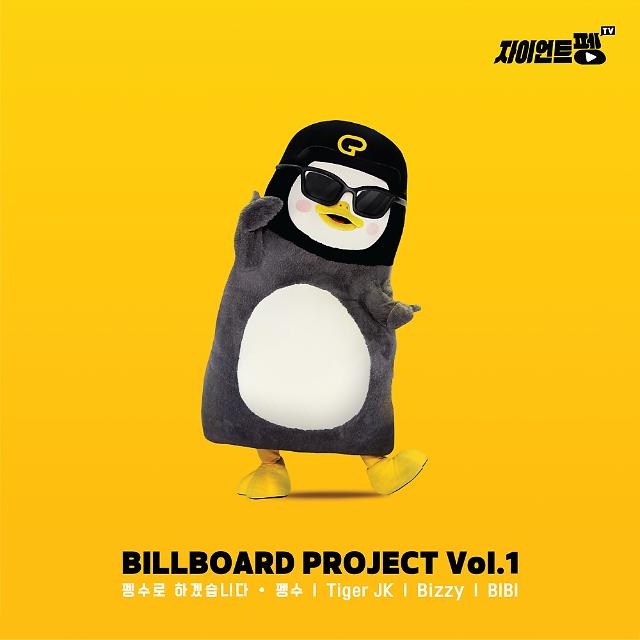 SEOUL -- Pengsoo, a popular giant penguin character played by an actor wearing a costume of a 10-year-old Antarctic penguin, has collaborated with Tiger JK, a rapper well known as the godfather of South Korea's hip-hop culture, to release a digital single targeting Billboard's music chart.

EBS, an educational TV and radio network operator, said in a statement on Friday that Pengsoo, Tiger JK and other hip-hop artists will release a collaborated digital single album "Billboard Project Vil.1" containing the title song "This is PENGSOO" on April 21.

The TV network operator said all profit created by the sales of the digital album will be donated to environmental organizations to commemorate the April 25 World Penguin Day to honor flightless birds and raise awareness on their existence threatened by global climate change.

Pengsoo first appeared in April last year and garnered phenomenal popularity among South Koreans with tier age groups ranging from toddlers to people in their 40s. The giant penguin character is not only cute, but it also uses its sharp tongue to throw smart jokes dubbed with sarcasm.

Since its first appearance, Pengsoo has received love calls from top celebrities such as comedian Yoo Jae-suk and girl band TWICE for collaborated content. The penguin character's own YouTube channel has some 2.1 million subscribers, with its video content garnering an average of 1.5 million views.

Pengsoo aims to follow the footsteps of Pororo, a cute animated penguin who dreams of flying and plays around with his friends. Pororo is one of South Korea’s greatest cultural exports, bringing joy to children all over the world. The wildly popular animated penguin from the children's TV series "Pororo the Little Penguin" that began airing on EBS in 2003 is now omnipresent, reaching and appealing to global users without borders.