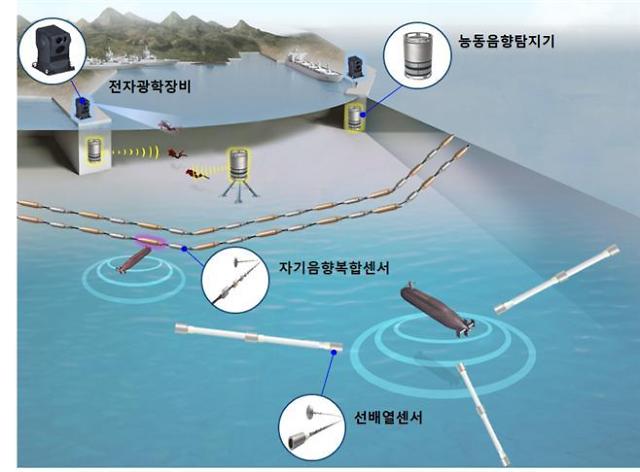 
SEOUL -- An improved port monitoring system for the early detection of approaching submarines has been developed and installed at major ports in South Korea. Key components were localized to ensure convenient and stable operation and it's linked to a military communications system for real-time surveillance.

Effective monitoring has become increasingly difficult as the noise of modern submarines has declined and the volume of sea traffic has increased. South Korea has launched a project involving the Agency for Defense Development (ADD), a state-run defense technology research body, and LIG Nex1, a defense company, to develop a better monitoring system.

The Defense Acquisition Program Administration (DAPA), a state body controlled by the Defense Ministry, said on Wednesday that some 130 billion won ($106 million) has been spent on the project to localize key components.

"This will contribute to strengthening the defense industry's competitiveness by improving the military's surveillance of underwater moving objects and securing the possibility of exporting them abroad in the future," DAPA said in a statement.

Detection performance and operational efficiency were enhanced to detect the low noise of submarines by applying home-made underwater sound sensors, the agency said, adding the new system can detect and analyze magnetic properties and noises while various combinations of underwater sensors and electronic optical equipment can be installed to increase the probability of detecting underwater objects.