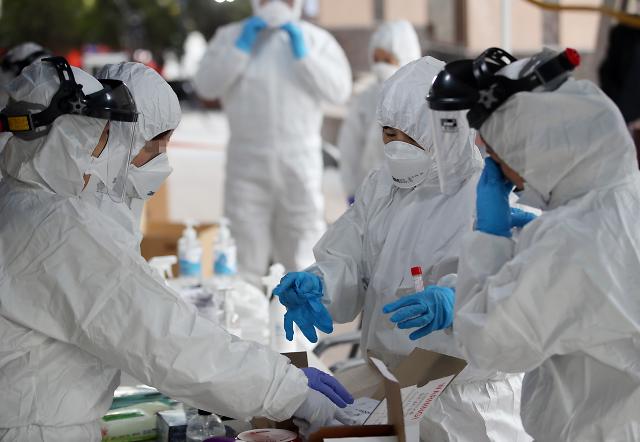 
SEOUL -- "I am going to stick this into your nose to take a sample from your upper respiratory system," a grim-faced doctor clad in a white anti-contamination suit all over his body said, holding up a 15 centimeter-long cotton swab. "Please try not to move. This is going to hurt."

It smelled like a dental clinic overlighted with fluorescent lights on each wall. The test was conducted inside a tiny toilet with grey cement walls at a COVID-19 screening center about the size of a freight container at the community health center of Jungnang District in eastern Seoul.

Three motor-run machines made a noise like ventilation devices aimed at keeping the center in negative pressure. "Tilt your head backward," the doctor said, asking Park Sae-jin, a scared 38-year-old reporter in Seoul, to sit on a small chair. After warning words, the ridiculously long sampling swab slid into the nose. The pain seemed to last an eternity.

The doctor humming in a low tone swirled the stick around. When he pulled out the swab with its end stained with blood, he carefully put it back into a cylindrical plastic container and said, "Let's do another one on your throat." The test in the throat ended with a volley of violent cough that shot sprays of saliva at the doctor's face.

Park never expected that he would visit the center until he woke up on March 11 to find strange tingly feelings at the back and upper throat. He immediately recalled a family reunion three weeks ago with his sister-in-law from the southeastern city of Daegu, the epicenter of mass infections.

After arriving at work in central Seoul, Park called a public health center to consult. Through a nationwide campaign, health officials have stated that COVID-19 involves symptoms of respiratory pain, shortness of breath, a high body temperature of above 37.5 degrees Celsius (97.9 degrees Fahrenheit) and muscle pains.

After finding nothing but a strange feeling in the throat, a female consultant advised Park to monitor his condition and get tested if he feels other symptoms such as a headache and fever. After lunch, Park noticed that his limbs and back ached, although his body temperature maintained an average of 36.5 degrees Celsius.

Assuming the whole thing was just symptoms of tonsillitis, Park caught a cab to visit a screening center, about 4.5 kilometers (2.7 miles) away from his home, because he did not want to put his wife and five-year-old son at risk.

When Park arrived at the community health center at about 7:00 p.m. (1000 GMT), its parking lot was empty in the darkness. Only a ray of light shone out from a single window. Not knowing what to do, he stood in the middle of the dark car park until someone shouted "Please keep a distance of two meters from me! Stay still!"

Two female medical officials wearing hazmat suits approached him and stopped about three meters away, saying "Please walk to the table and fill out a form! Return to where you are standing now after you are done filling it out!"

Park wrote down his condition, name, birth date and phone number. "Please keep the distance!" a medical official yelled and talked with people inside the center through an interphone. When the huge metal door slid open, three doctors in hazmat suits were seen wearing goggles, face masks, gloves and rubber boots inside a small cubicle encased by glass walls. 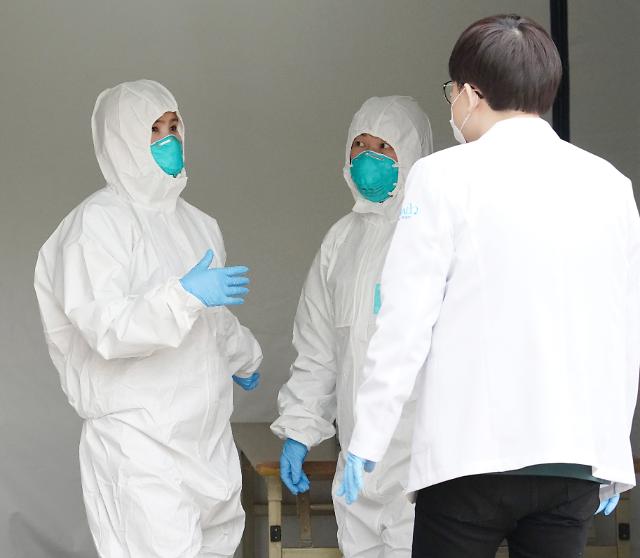 The process resembled a movie scene like someone was visiting a friend locked up in a prison with the doctors communicating through an interphone installed on the glass wall.

After hearing about symptoms, one doctor asked him if he had been involved in any religious activities lately with Shincheonji, a doomsday cult blamed for an explosive COVID-19 outbreak in Daegu where infected believers engaged in active social and religious activities, leaving thousands of unrelated citizens infected with the virus.

The interphone was cut off and doctors were locked in what seemed like a silent debate inside the sealed cubicle. Waiting on a stool ended when a doctor stepped out and said "We are going to test you for COVID-19. Please come this way."

The examination took less than a minute. "You can go home now. It will take about two days until we notify you later," the doctor said, adding a text message will be sent if the result is negative.

Outside the center, a medical official shouted again, "We advise you to walk home to prevent cross-contamination! Please start your self-quarantine process!" Park walked home for about 90 minutes.

As his house, Park found his wife holding an antiviral disinfectant spray and wearing a mask, a pair of disposable latex gloves and a disposable apron. His son was locked in the bedroom. After receiving a disinfectant spray shower, Park washed his hands and locked himself in the dressing room where a sleeping bag was rolled out on the floor.

A bottle of mineral water and a sandwich were prepared on the table. After finishing his simple dinner, Park crawled into the sleeping bag.

At around 10:00 a.m., when his son left for kindergarten and his wife was out to work, Park wiped the toilet seat, the water basin and the doorknob clean with a disinfectant spray as ordered by the self-quarantine info-sheet.

Park heaved a sigh of relief after receiving a text message reading "Hello this is the Jungnang Community Health Center. We inform you that the test result for coronavirus is negative