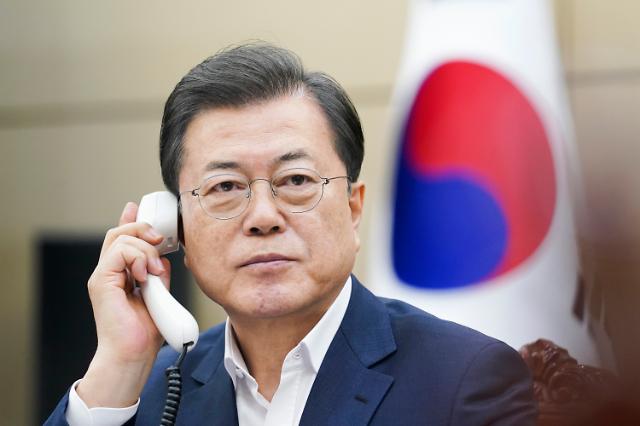 [Courtesy of the presidential Blue House ]


SEOUL -- With his heart swollen with pride, President Moon Jae-in slipped away from diplomatic rules to reveal U.S. President Donald Trump's urgent request for diagnostic reagents and other quarantine items to stem a pandemic, as well as a flurry of similar requests for help from other countries grappling with shortages.

"There are many official government-level requests for diagnostic reagents, along with private-level export consultations recently," Moon said during his trip on Wednesday to a diagnostic kit factory run by Seegene in Seoul. "President Trump has also requested urgent support for diagnostic kits and other quarantine items."

"The government will actively support exports," Moon said, adding global cooperation has become "very urgent" in both quarantine and economy. "The ability of our companies to diagnose will play a major role in global cooperation," he said, describing the fast detection of COVID-19 infections as "a lifesaver and the beginning of quarantine."

South Korea has made quick progress in quarantine with quick screening, isolation and treatment, plus accuracy, Moon said. His confident remarks proved numerically. As of March 25, 3,730 people have been cured and discharged, with 5,281 others still in isolation wards for treatment.

Health officials predicted they could accelerate the pace of curing and discharging patients from this week. "There are no cases of people not being hospitalized or dying because of lack of treatment as an upward trend in the number of patients has slowed down," said Ki Mo-ran, a National Cancer Center professor who heads a committee of experts.

Critical patients have received treatment with artificial respiration and extracorporeal membrane oxygenation (ECMO), which is an extracorporeal technique of providing prolonged cardiac and respiratory support to persons whose heart and lungs are unable to provide an adequate amount of gas exchange or perfusion to sustain life.

As of February, there are 350 ECMOs and 9.823 artificial ventilators used by South Korean hospitals, Yoon Tae-ho, a state anti-epidemic team head told a regular press briefing on Wednesday.

Jeong Eun-kyeong, director of the Korea Centers for Disease Control and Prevention (KCDC), said that exports of reagents are possible if South Korea has enough supplies. "I think we can provide support as long as it doesn't hamper our domestic quarantine," she said, adding South Korea has used five reagents to test up to 20,000 people every day.

According to the Foreign Ministry, 47 countries have sent inquires or requests for exports of screening kits. So far, kits have been shipped to the United Arab Emirates, Romania and Columbia, while 39 other countries wanted humanitarian assistance.