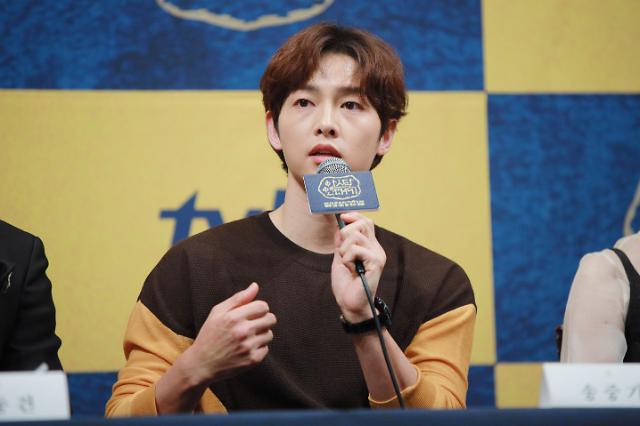 
SEOUL -- Song Joong-ki, a South Korean actor who gained international fame for his appearance in the 2016 hit drama series "Descendants of the Sun," put himself into self-quarantine for two weeks to see if he was infected with a novel coronavirus after he returned home from Colombia.

"Song Joong-ki returned home today and fortunately, his health condition is normal," HISTORY D&C, the 34-year-old's agency, told on Tuesday. The agency said the actor would voluntarily take some time to rest during his self-quarantine period.

Song had visited Colombia in January to shoot "Bogota," a crime-thriller drama depicting a story about a young South Korean immigrant to Colombia in the 1990s. Filming staff, actors and actresses decided to stop filming and return home after the Colombian government imposed a travel ban on March 16.

Song made his debut in the 2008 film "A Frozen Flower". He and Song Hye-kyo, the 38-year-old actress who co-starred in the Descendants of the Sun, got married in October 2017, but their marital life came to an unexpected end in June last year.

After his divorce, Song Joong-ki returned to the black screen with part three episodes of "Arthdal Chronicles," a hit fantasy drama series, created by tvN, a South Korean cable TV broadcaster, and distributed by Netflix in August 2019.