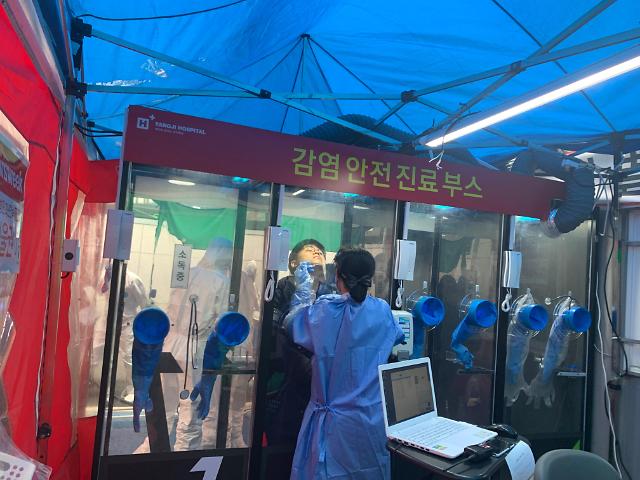 SEOUL -- Buoyed by the successful operation of drive-thru screening that gained global attention for a quick and safe diagnostic test, South Korea introduced a "walking-thru" system at airport checkpoints that can drastically reduce a heavy workload and time taken for the screening of travelers from abroad.

The system will start appearing on March 25 at 40 points at Incheon International Airport, South Korea's gateway west of Seoul. It takes six or seven minutes as samples are collected immediately after arrival. When a traveler enters a diagnostic booth, medical personnel take samples from outside to reduce the risk of direct contact. While the booth is being disinfected, another booth will take samples.

From March 22, South Korea began screening all arrivals from Europe, requiring even those with negative results to put themselves into self-quarantine for two weeks. Air traffic has been visibly shrunk, but the number of patients among those arriving at the airport has increased to 144 due to a global pandemic.

The Korea Centers for Disease Control and Prevention (KCDC) reported 64 new cases, including 14 related to those who have arrived from abroad. Some 5,680 patients are still in hospital for treatment, while 3,166 others have been cured and discharged. The virus has killed 144 people.

Unlike the United States and other countries, South Korea has not imposed a total entry ban. Instead, airport quarantine measures were tightened.

Yoon Tae-ho, a senior health official, described a walking-thru system as a modified form of drive-thru screening. "Soon after arrival, samples will be taken from the airport and subsequently admitted to a temporary living facility."

Usually, it takes about 30 minutes to screen one person because of meticulous disinfection. Doctors and nurses wear anti-contamination suits including jumpsuit-like overalls, protective goggles, multiple layers of latex gloves and masks. They are fatigued by just wearing the suit because it gets really hard to breathe and the inside gets warm because of body temperature.

Boramae Medical Center operated by the Seoul National University Seoul hospital has adopted a "glove-wall" system that allows doctors to examine people from the other side of a protective wall.

The glove wall system consists of a box-shaped room with a clear acrylic wall with a pair of hand holes. The isolated test rooms are similar to a baby incubator but the hand holes have special oversleeves extended outwards so that medical staff can test people by swabbing the upper respiratory system and throat without exposing themselves.