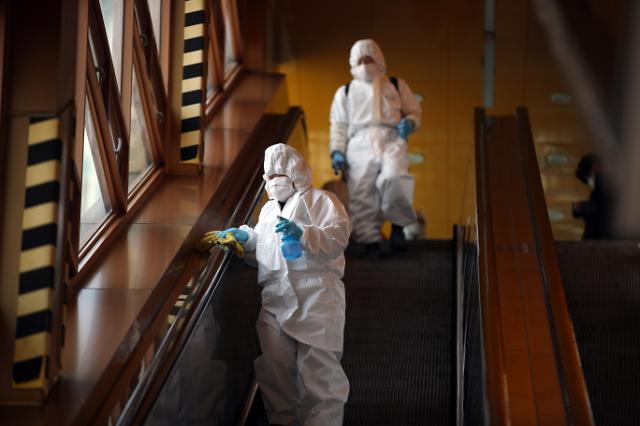 SEOUL -- South Korea launched a second round of its anti-epidemic battle against thousands of Shincheonji believers who have shunned mandatory virus checks while working inconspicuously at workplaces which are vulnerable to group infections.

The move came as sporadic inspections continue to occur at hospitals and social welfare facilities despite a hectic national campaign to contain the epidemic that has left about 8,000 people infected and 68 dead since the first case was reported on January 20.

Health officials were encouraged by a steady decrease in the number of new daily cases that stood at 110, compared to 177 patients who were discharged from hospitals on a single day. It marked the first time that the number of cured patients a day has exceeded the number of daily new infections. So far, 510 patients have fully recovered, ending their secluded life and treatment for up to three weeks.

"The epidemic at home showed signs of calming down a bit, but it is spreading worldwide, creating a serious risk factor," Yoon Tae-ho, a state anti-epidemic center official, told a regular press briefing on Friday. "It's premature to judge by the number of confirmed cases."

According to the Korea Centers for Disease Control and Prevention (KCDC), 248,647 people, including 210,000 Shincheonji followers, have been tested. Shincheonj Church of Jesus, a religious group, has become the target of public fury since a 61-year-old follower was guaranteed on February 17 after attending services at its branch in the southeastern city of Daegu.

Some 60 percent of confirmed cases in South Korea was, directly and indirectly, related to the religious group with about 310,000 followers.

For their fresh campaign to eradicate infections related to Shincheonji, health officials singled out 4,128 followers working at hospitals, child care centers, nursing schools and social welfare and care centers which have an aggregate workforce of 677,000 nationwide. Of them, 3,162 followers will be forced into virus test centers.