Polish man quarantined in Seoul as patient infected with virus 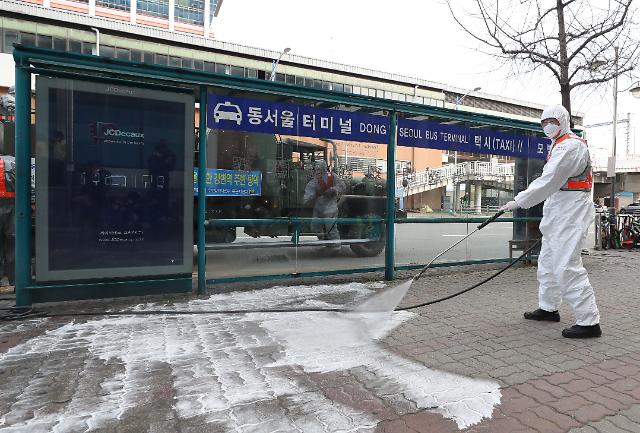 A military medical soldier disinfects the streets near a subway station in eastern Seoul on March 12. [Yonhap News Photo]

SEOUL -- A Polish man was quarantined as a patient infected with a new coronavirus two days after he arrived through an international airport west of Seoul. He is the first foreigner to get stranded over an epidemic in South Korea after the World Health Organization declared a global pandemic.

Health officials said they are tracking the main's two-day moving line around his residence in Hannam-dong in a district near the center of Seoul. The man in his 30s arrived in Incheon International Airport on March 10 and used a train to travel from Incheon to Seoul.

In Seoul, the man has visited restaurants, a dental clinic, a bank, a virus test center and other places in Handam-dong and Itaewon, both in an area which has a large concentration of foreign and expatriate residents and diplomats, as well as the families of U.S. soldiers stationed in South Korea.

From March 15, all travelers from France, Germany, Spain, Britain and the Netherlands will go through tightened quarantine at airports. Those who arrive via Dubai and Moscow in the past two weeks will follow the same procedure. Previously, similar requirements have been applied to travelers from China, Macau, Hong Kong, Iran and Italy. South Korea has imposed tough entry restrictions on Japanese visitors.

Despite the rapid spread of COVID-19 in Europe, health officials said WHO's pandemic declaration would not alter South Korea's basic anti-epidemic guidelines.