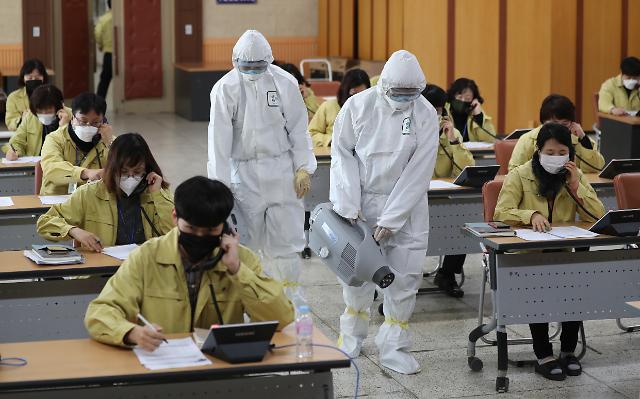 SEOUL -- The city government of Seoul put hundreds of private call centers manned by tens of thousands of workers under emergent scrutiny, alarmed by the detection of at least 90 people infected with a new coronavirus at one place in a crowded commercial area.

The number of COVID-19 patients under treatment in Seoul stood at 168 as of midnight Tuesday, including 65 related to a call center at a building in the southwestern district of Guro. Nationwide, health officials reported 242 new cases that brought the total number of patients to 7,755. The virus has killed 60 people since the first case was reported on January 20.

"The call center's mass infection may be the beginning of a third wave leading to widespread local infections," Seoul Mayor Park Won-soon warned on Wednesday, adding that city officials launched an examination of 417 private call centers in Seoul. "We will check the type of work, facilities and the status of operation and present guidelines."

The call center in Guro was manned by about 760 people who have worked together in narrow spaces without wearing masks. Many workers at the call center have used public transportation while commuting from other areas in Seoul and cities in the densely populated metropolitan area with a population of some 26 million.

The outbreak in Guro fueled a health scare among millions of commuters in the metropolitan area, but Park played down the possibility of further infection through subway stations and city buses, citing strict daily disinfection. "There is little possibility of community infection in this area."

Across the country, hundreds of thousands of people work at call centers, many of them stuck in dense and narrow structures. Employees work close to each other at less than a meter distance, making them vulnerable to infectious diseases. Call center workers are mostly temporary and cannot work from home because they respond by looking at personal information.

From the call center in Guro, health officials identified five believers of Shincheonj Church of Jesus, which became the target of public fury since a 61-year-old follower was guaranteed on February 17 after attending services at its branch in the southeastern city of Daegu. Some 60 percent of confirmed cases in South Korea was, directly and indirectly, related to the religious group with about 310,000 followers.

The Shincheonji followers in Guro tested negative for the virus, but health officials will continue their examination to see if other followers work at the call center.

The Korea Centers for Disease Control and Prevention (KCDC) said it would soon issue guidelines for call centers and other worksites with a similar working environment. KCDC director Jeong Eun-kyeong asked such companies to actively improve their work style and environment.

-- Adjust the gap between the seats to reduce the density as much as possible and clean and disinfect the office space and the surface of equipment.

-- Suspend the attendance of workers showing related symptoms without any disadvantages