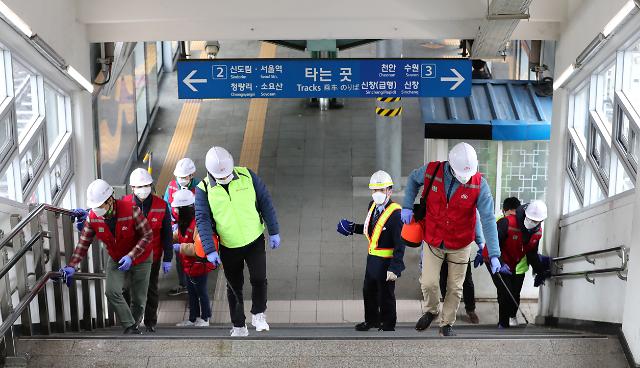 
SEOUL -- The number of new cases has visibly been down thanks to a hectic national campaign to contain an epidemic, but health officials cannot smooth out the wrinkles of anxiety because of herd infection at a call center that left dozens of people infected with a new coronavirus overnight in Seoul and its adjacent province.

A 19-story building in the southwestern district of Guro in Seoul was shut down for disinfection on late Monday when 46 workers at a life insurance company call center and four relatives tested positive for the virus.

The call center has offices manned by more than 600 workers on four floors of the building. They have worked together in narrow spaces without wearing masks due to the nature of their work. Health officials are concerned about further infections as the building housed offices, commercial facilities and residential flats.

"We must fully cooperate beyond administrative jurisdiction," Seoul Mayor Park Won-soon said in a video conference with local government officials in the metropolitan area. He said the number of patients related to the call center stood at 64.

Many workers at the call center have used public transportation while commuting from other areas in Seoul and cities in the densely populated metropolitan area with a population of some 26 million.

Many call centers run or outsourced by financial companies have dense booth structures with very small private spaces. Employees work close to each other at less than a meter distance, making them vulnerable to infectious diseases. Call center workers are mostly temporary and cannot work from home because they respond by looking at personal information.

The Korea Centers for Disease Control and Prevention reported 131 new cases that brought the total number of infections to 7,513 as of midnight Monday. The virus has killed 54 people and 247 fully recovered people have been discharged.