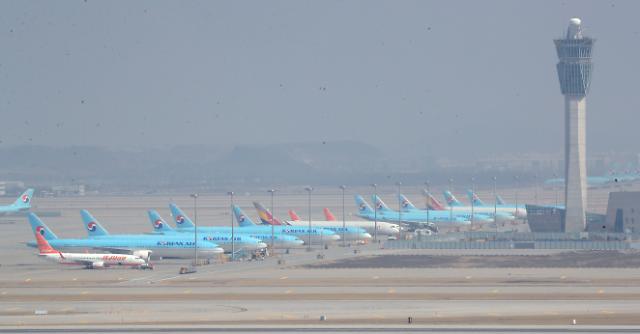 SEOUL -- Buoyed by signs of slowing down in a domestic epidemic, health officials turned their eyes to a global situation to see if South Korea needs measures to restrict an inflow of travelers from foreign countries as they did. Worldwide, 106 countries and territories imposed entry restrictions or tougher quarantine procedures on people from South Korea.

Deputy Health and Welfare Minister Kim Kang-rip said that a government anti-epidemic task force held discussion on whether South Korea needs certain measures to prevent domestic infection by foreign visitors. "When assessing the recent global situation, we believe that measures should be taken to block the spread of local communities and to curb a further inflow from outside the country."

Kim expressed concerns about a slow response among some foreign countries to the spread of COVID-19 across borders. "With the experience and insight we have, there are some things that we're worried about when we look at measures taken by foreign countries," he told a regular press briefing on Monday.

"Although we can think about entry restrictions based on objective scientific evidence, we believe that the possibility of applying these measures at this stage is not yet high," Kim said, adding the COVID-19 epidemic appeared to have been "somewhat subdued" in South Korea.

Health officials reported 248 new cases, bringing the total number of infections to 7,382 as of midnight on Sunday. It is the first time in 12 days that the number of new daily cases has dropped to the 200 level. The virus has killed 51 people while 166 fully recovered people have been discharged.

However, health officials are concerned about a steady rise in the number of new cases in Seoul and its surrounding Gyeonggi province. Of the 248 new cases, 90 were reported in Daegu, 26 in North Gyeongsang Province, 11 in Geyoggi and ten in Seoul.

"It is true that the spread has been somewhat subdued recently, but it is still difficult to predict that it is improving," Kim said. "What's worrisome is that sporadic small-scale infections continue to appear and be reported in many areas. We assess that it is a situation in which we need to make more efforts and have more tension to prevent further proliferation."