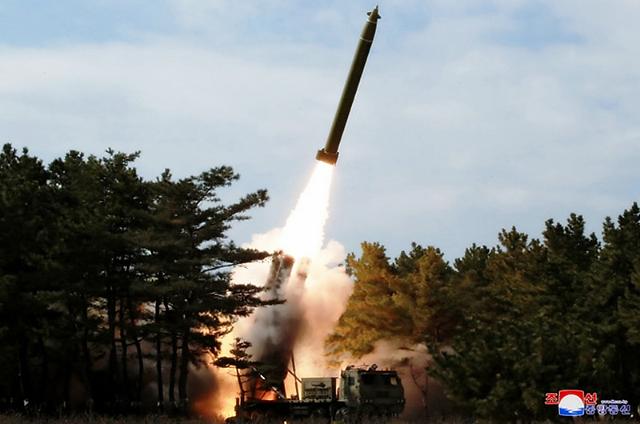 SEOUL -- North Korea appeared to have achieved technological progress in its "super-large" multiple launch rocket system by reducing the time of continuous launch in a fire-power drill supervised by leader Kim Jong-un who has vowed to show off a new strategic weapon.

A day after North Korea fired two projectiles into the sea off the east coast, North Korea's state media released pictures that showed the same vehicle used in previous launches. Two projectiles were fired within a 20-second interval on Monday and flew about 240 kilometers (149 miles), reaching a maximum altitude of 35 km, according to the South's Joint Chiefs of Staff.

Kim expressed "great satisfaction with the fact that the artillerymen are prepared to make rapid reaction to any circumstances and perfectly carry out their firepower combat duties," according to Pyongyang's official Korean Central News Agency (KCNA) on Tuesday. Specifications were not disclosed, but North Korea has tested 600-㎜ multiple rocket launchers.

"The men of long-range artillery pieces on the front participating in the drill proudly demonstrated the accurate marksmanship which they had improved in their training," the leader was quoted as saying.

In his New Year's message, Kim warned that North Korea would show off a "new strategic weapon", saying he no longer sees a reason to stick to his earlier decision to suspend missile tests, amid a prolonged dispute with the United States over how to achieve denuclearization to a point that could satisfy the international community so that sanctions can be lifted.

In a series of test launches last year, North Korea has reduced the time of continuous launch. The interval in the test of two projectiles on November 28 was narrowed to 30 seconds. So far, two projectiles have been fired the same launch vehicle with four tubes.

Experts in Seoul have said that it may take more time for North Korea's super-large multiple launch rocket system to use four tubes for continuous launch in a shorter time without using fixed supports. If completed, the new weapon would pose a great threat to South Korea's missile defense system.

North Korea has pushed for the development of new solid-fuel weapons to replace a stockpile of liquid-fuel short-range missiles. However, they are "notoriously inaccurate, a shortcoming that limits their military utility unless armed with nuclear warheads," Michael Elleman, a missile expert at the International Institute for Strategic Studies (IISS), said in an article published by 38 North, the website of a U.S. think tank, on October 10, 2019.