BTS members tried to reveal 'deep inside' through new album 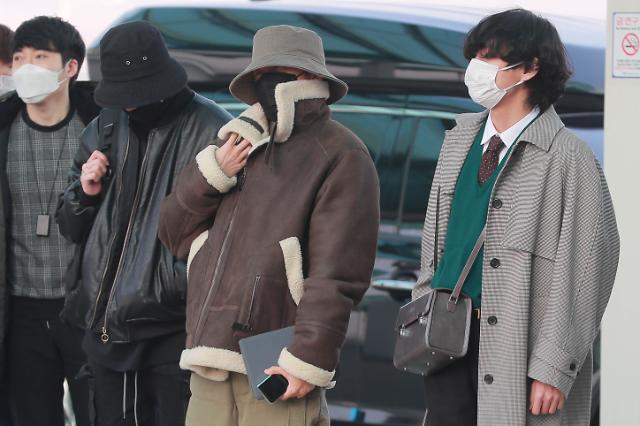 
SEOUL -- Through their new album, "Map of the Soul: 7," BTS members tried to show the deep inside they have wanted to hide in their seven-year musical journey to the global stardom and their resolution to shed the scars, sorrows and emptiness that they've gone through.

"If we had talked about ourselves in our previous album, we wanted to show a different side of us this time," Jin said in a news conference televised live through YouTube. "It's an album of seven BTS members who look back on the past seven years."

The news conference was to be held at a convention center in southern Seoul, but BTS replaced it with pre-arranged answers due to concerns about a sudden surge in the number of patients infected with a new coronavirus that sparked a widespread public health scare.

"We also brought out the deep inside that we had wanted to hide," Jin said, adding that the band also wanted to tell fans "this is who we really are."

RM, the group's leader and rapper, recalled the lonely moment he has experienced in writing songs alone. "In fact, I came out to the studio alone and wrote crying. There is a constant fear of showing weakness and admitting it. But if I look back on seven years, I wonder if I'm lucky enough to do this kind of music and dance with these people."

V shared RM's feeling saying he now has overcome emptiness. "After performing like a festival and becoming the main character, the moment I got into the car after the performance, there was a great emptiness. Now I'm through."

The new album contained the resolution of BTS members to face "the scars, sorrows, and trials that we've gone through and fight head-on," SUGA said. "Sometimes we were very out of balance. Every time that happened, our inner shadow and fear grew, and now we think we are holding the center of gravity to a certain extent."

"The process of seven people living together and solving disputes was both good and painful," said J-Hope.

The 20-track album is the second part of its "Map of the Soul" album series, following "Map of the Soul: Persona," released in April last year. The new album rocked the world music scene once again and sold more than three million copies at home in 65 hours of its release on February 21, according to South Korea's album chart, Hanteo Chart.

"As we made our comeback after 10 months, we wanted to do things that had a lot more quality to talk about," RM said, adding the new album was completed "with a lot of our soul, strength and effort."

RM said that BTS songs together with Parasite, the Oscar-winning film directed by Bong Joon-ho, have boosted global interest in studying the Korean language. "This, too, is very grateful and joyful."

"I think artists who best represent the times of that era are most loved," RM said. "I think it was fresh and attractive because it was not a concern that was felt just in South Korea, but because it was shown to many people of my generation around the world. I think we were loved by fans around the world by revealing problems and commonality of the era through various media, including music, art and choreography."

When asked about his enlistment, Jin said, "I think so many people are wondering, but nothing has been decided yet."