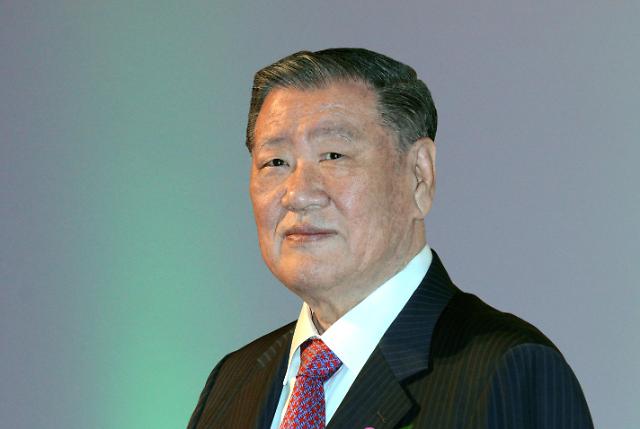 SEOUL -- Chung Mong-koo will relinquish his executive director of Hyundai Motor, more than two years after the 81-year-old disappeared from public eyes amid rampant speculation about his health, allowing his only son to take undisrupted control over the country's second-largest conglomerate.

In a decision on Wednesday, Hyundai Motor's board did not introduce a proposal to re-appoint Chung Mong-koo as an executive director. When his three-year term ends on March 16, the chairman will maintain the position of Hyundai Motor's unregistered executive and Hyundai Mobis' registered director.

Chung Mong-koo will continue to serve as group chairman, although he has stayed away from daily group affairs since he disappeared from public eyes in 2018. The Fair Trade Commission (FTC), a state anti-trust watchdog, recognized him as chairman of the auto group in 2019 after state anti-trust regulators consulted a doctor's note to see if his health has deteriorated so much that he could not participate in decision-making on crucial group affairs.

At the time, FTC officials said there is plenty of room for Chung Mong-Koo to exercise control over his group normally through a person associated with him. Every year, the watchdog releases a list of large business groups, known as chaebol, with assets of 10 trillion won ($8.4 billion) or more.

It's now clear whether Chung Eui-sun, 49, would be appointed as chairman at a meeting of shareholders on March 19. In the absence of his father, Chung-Eui-sun, 49, has led the auto group. As executive vice chairman, he launched a campaign to eliminate a conservative group culture, streamline its complicated governance structure and enhance transparency.

Chung Eui-sun, born in Seoul in 1970, went to Whimoon High School and majored in business at Korea University. He joined Hyundai Mobis in 1994 and left to study for an MBA at the University of San Francisco before returning to climb up the ladder through a number of posts at Hyundai Motor and Kia Motors.

Hyundai and some other conglomerates are undergoing a generational change. Of the third and fourth-generation members of conglomerate owners, Chung Eui-sun has been cited by market watchers as a promising next leader who can properly manage the auto group after his father retired. Hyundai Motor Group chief to quit director post for flagship unit