Exports of S. Korean instant noodles up 122% over 5 years 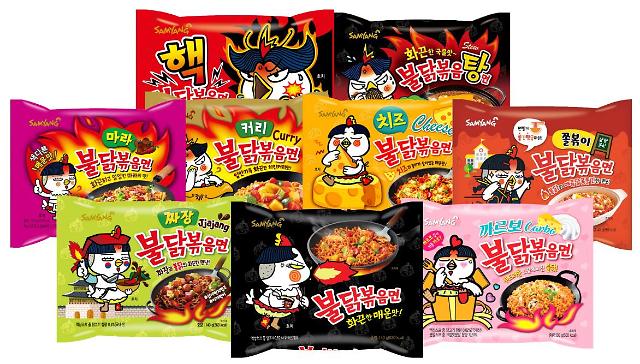 According to K-stat, a trade statistical information system operated by the Korea International Trade Association (KITA), exports of ramyeon stood at $467 million in 2019, up 13.1 percent from a year ago.

The export volume has increased by 122 percent over the last five years. China is the largest importer of South Korean ramyeon with $124 million, followed by the United States with $54 million. Hot South Korean instant noodles are also popular in Japan, Indonesia and Taiwan.

According to a report released by Korea Agro-Fisheries & Food Trade Corporation, South Korean exported $380 million worth of ramyeon to the Middle East in 2019.

Samyang Foods, credited for introducing the first instant noodles in South Korea in 1963, has targeted Southeast Asian countries with Halal-certified "Hot Chicken Flavor Ramen. When the noodles famous for its infernal spiciness hit the shelves in Southeast Asian countries in 2017, it created an online phenomenon, with consumers uploading their agonizing journey of eating hot noodles onto YouTube.