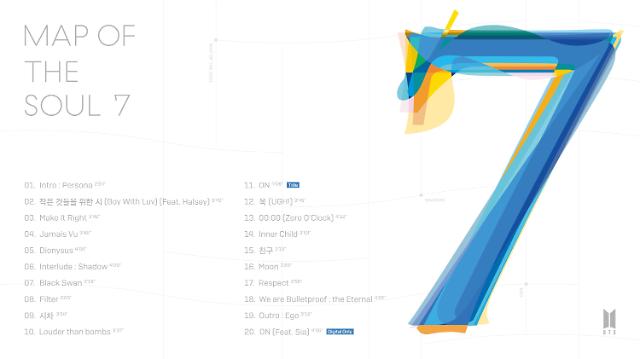 
SEOUL -- BTS' new album "MAP OF THE SOUL : 7," scheduled for release on February 21, contains 20 songs, including ON, the title track, and its bonus version featuring Australian singer Sia.

The band uploaded an image showing the tracklist for its upcoming album via social media at midnight Sunday (1500 GMT). Since January 10, BTS has released pre-released songs and teaser images that hint at what MAP OF THE SOUL : 7 would be like.

The campaign coupled with collaboration with renowned artists to preach its musical philosophy about self-love and loving others to make the world a better place through modern art language. Arts exhibitions were held in London, Berlin, Buenos Aires, Seoul and New York from January.

Solidarity, the main theme of CONNECT, BTS, matches the concept of MAP OF THE SOUL : PERSONA that depicts the dark side of global fame which the boys have all felt during their super-successful career since their debut in 2013. The art project received positive feedback from fans and critics for mixing two different genres of art to create sympathy among listeners and audiences.

BTS will embark on this year's new world tour covering 18 cities with the first concert to be held in Seoul on April 11. The band was the top-grossing touring group of 2019 with more than $196 million, according to American music magazine Billboard.