Parasite well-received among American viewers despite some cynicism 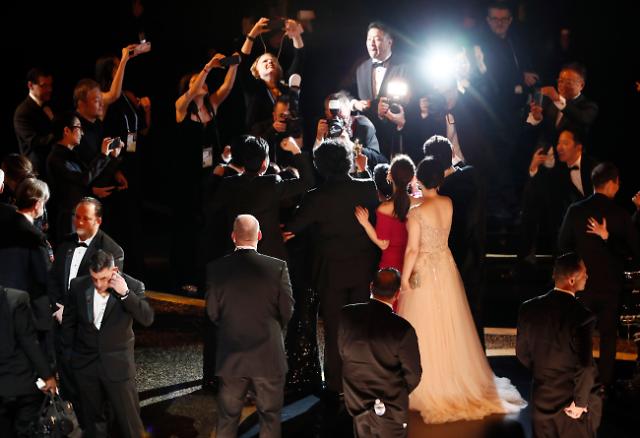 SEOUL -- By now, most people have gotten wind that Parasite, directed by Bong Joon-ho, swept the floor at the 2020 Academy Awards with four Oscars. This is a monumental moment, not only for the South Korean film industry, but for the American film community as well. However, not everyone seems to share the same consensus.

The academy selects the winners of the Oscars based on votes from the 8,469-member voting body. One voter gave her honest opinion while speaking with The Hollywood Reporter: "Parasite is beautifully done, but it didn’t hold up the second time, and I don’t think foreign films should be nominated with the regular films."

Although the anonymous voter did not clarify what "regular films" are supposed to be, she was not the only one who had something less-than-favorable to say about Parasite winning the best picture award.

Jon Miller, a host who appears on a streaming network, BlazeTV, had much to say on Twitter: "A man named Bong Joon Ho wins #Oscars for best original screenplay over Once Upon a Time in Hollywood and 1917… These people are the destruction of America."

Since the tweet was posted, many A-list celebrities have defended Academy's choice, disregarding Miller's comments. "Do they pay you for these dumb takes or is this something you do for fun?" John Legend, an American singer, wrote in a retaliatory post on Twitter.

Many Asian-American actors and actresses of Hollywood celebrated Parasite's big win for the South Korean film industry. "Congratulations @ParasiteMovie So so proud to be Korean," Sandra Oh, an actress with two Golden Globes, went on Twitter to congratulate the cast and staff of Parasite.

Parasite achieved a huge breakthrough for U.S. and South Korean film industries. Not only by becoming the first non-English language film in Oscar history to win the award for Best Picture, but also being the first film from South Korea to be nominated for International Feature Film, this marked the start of a more diverse Oscars.

(This article was written by Aju News Reporter Joseph Kwak)