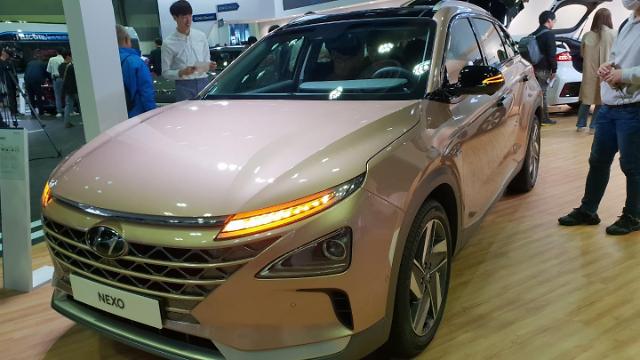 SEOUL -- In an effort to accelerate the popularization of hydrogen fuel cell vehicles and set up infrastructure in the United States, South Korea's Hyundai auto group has forged a crucial partnership with the U.S. Department of Energy.

Hyundai Motor said on Tuesday that it has signed a memorandum of understanding with the U.S. Department of Energy (DOE) to cooperate in the development of innovative hydrogen fuel-cell technologies, set up infrastructure such as hydrogen fuel charging stations and share data collected from demonstrations with various organizations including schools, companies and government organizations.

Hyundai said that it has established a foundation to expand its fuel cell vehicle (FCEV) infrastructure, which has been centered in California.

"We are delighted that our technologies can help the U.S. Department of Energy as it continues to explore the future potential of hydrogen," Hyundai Group Executive Vice Chairman Chung Eui-sun was quoted as saying.

FCEVs are considered the next-generation zero-emission clean energy vehicles that are more efficient than electric vehicles. Because hydrogen fuel charging stations cannot be built in populated areas for safety reasons, the lack of accessibility to charging stations is a huge obstacle to the popularization of FCEV.

To tackle such problems, Hyundai will support DOE's efforts to set up a hydrogen fuel charging station in Washington D.C. where the only charging station in the city has closed down. The carmaker will provide five units of Nexo, a sport utility vehicle (SUV)-type FCEV, so that DOE can carry out demonstrations.

Hyundai's cooperation with DOE began in 2004 when the carmaker provided 33 of its first and second-generations FCEVs to a project to test FCEVs in harsh real-life conditions to validate the effectiveness and usefulness of FCEVs. Hyundai and DOE co-participated in the demonstration of Tucson ix FCEV from 2012 until 2017.

Targeting the U.S. and global commercial vehicle market, where emission standards are tightened every year, Hyundai debuted HDC-6 NEPTUN, a concept model for its commercial hydrogen-powered heavy-duty truck, last year. It is the latest member of Hyundai's hydrogen-powered vehicle family line that began in 2013 when the carmaker started mass producing the FCEV version of Tucson. The carmaker launched Nexo in December 2018.

Hyundai said that through a joint venture with H2 Energy, it commercialized hydrogen-powered commercial vehicles in Switzerland by providing 1,600 heavy-duty trucks in 2019. The commercialization will continue until 2023. In the U.S., Hyundai regards the world's largest commercial vehicle market as an important next phase of its hydrogen campaign.