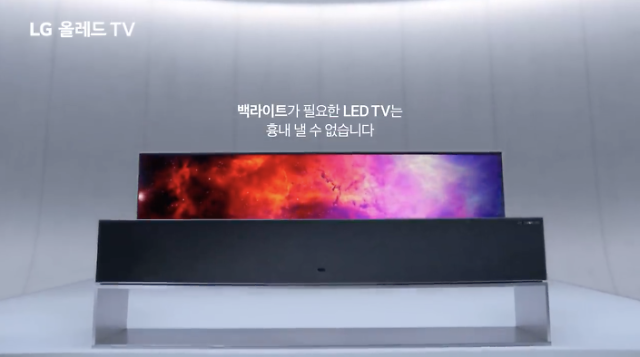 SEOUL -- LG Electronics will push ahead with the release of the world's first rollable organic light-emitting diode TV in the first half of this year, saying it is almost in a stable stage to reach consumers.

LG said on Thursday that the quality of rollable OLED TVs is important for use by consumers. "It can be released within the first half of this year because it is almost in a stable stage," an LG official said in a conference call on corporate earnings.

Originally, a 65-inch rollable OLED TV was to hit the market last year, but LG has put off its release to improve quality, saying the company would take a different approach in marketing, sales and production. The rollable TV has an OLED screen that can appear and disappear from a base unit at the touch of a remote control button.

At CES 2020 in Las Vegas, Samsung Electronics showcased a new lineup of TVs using its latest microLED technology that features ultra-slim designs and almost no bezels. Samsung said multiple microLED TVs of various sizes can be put together and connected to create new combinations. As it has a higher density than normal LED TVs, microLED TV is suitable for displaying ultra-high-resolution video contents.