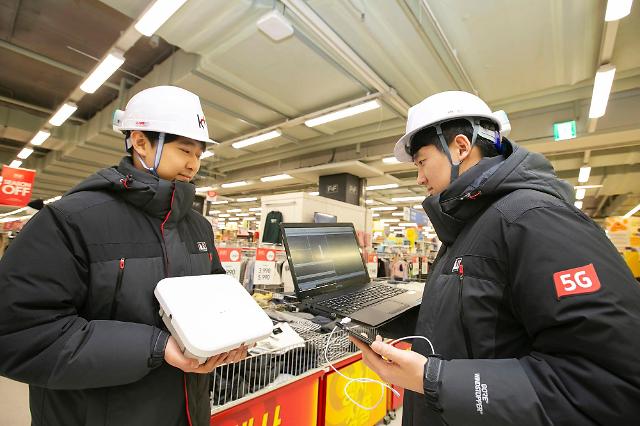 SEOUL -- To commercialize a true 5G ecosystem that will speed up the advent of self-driving, smart factories and smart cities, South Korea's top telecom company, KT, successfully verified the on-site transmission of data from a self-driving vehicle and a base station using the frequency of 28GHz bandwidth.

The 28GHz 5G network will make data transmission speed faster especially in areas where traffic is concentrated, such as stadiums and large shopping malls. Essential network services for self-driving cars will be safer.

KT said Wednesday that it has verified a 28GHz environment at a test base in the southern city of Daegu by applying ultra-reliable low latency communication (URLLC) technology to reduce errors in wireless transmission and reduces unnecessary data transmission between base stations and terminals. URLLC is for latency-sensitive devices for applications like factory automation, autonomous driving, and remote surgery. These applications require sub-millisecond latency.

The 28GHz-based 5G network will make data transmission speed faster especially in areas where traffic is concentrated, such as stadiums and large shopping malls. Essential network services for self-driving cars will be safer.

"By commercializing the next-generation 5G network based on 28GHz, which enables ultra-fast, ultra-low latency transmission, 5G services such as urban hotspots, self-driving cars, smart factories and mobile robots will be activated," said KT's convergence technology institute head Jun Hong-bum. A hotspot is a location that offers Internet access over Wi-Fi through the use of a router.

The National Radio Research Agency (RRA) will set up a 28GHz chamber for antenna developers and base station equipment manufacturers to conduct radio tests on a variety of wireless products.
SK Telecom is developing a dual-band modem capable of using 3.5GHz and 28GHz together.

In October 2019, KT announced the development of the world's first open 5G beamforming base station in the 28GHz band through cooperation with Movandi, a U.S. 5G startup, and Solid, a domestic technology company. Beam-forming is possible between equipment made by different companies.

Beamforming has been linked only between digital wireless equipment of same manufacturers, but KT said it is now possible among equipment from different manufacturer by standardizing complicated beamform interlocking procedures based on open base station specifications of the ORAN Alliance, a global carrier-led effort to drive new levels of openness in the radio access network of 5G wireless systems.

MIMO uses antennas at each end of the communications circuit. Massive MIMO is a system with a high number of antennas that makes it far more resistant to interference and intentional jamming than standard MIMO networks which use two or four antennas. The 5G era needs Massive MIMO’s ability to serve multiple users simultaneously in a condensed area while maintaining fast data rates and consistent performance.