Second round of AI-led '8K TV War'; Even sound has become more intelligent. 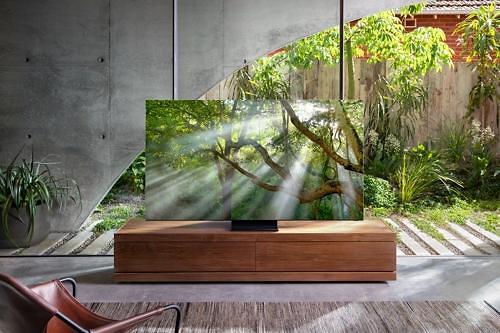 LAS VEGAS -- A "TV war" between Samsung Electronics and LG Electronics continues in Las Vegas. They will introduce new TV products that greatly enhance AI (Artificial Intelligence) functions at CES 2020, the world’s biggest technology exhibition that opens on January 7. The two companies, which locked their horns over 8K resolutions last year, will engage in a confrontation of pride by applying AI technology that has evolved even more into TVs.

Samsung will introduce its 2020 QLED 8K TV at CES. The new product is installed with an AI quantum processor to showcase AI technology that has improved not only in quality but also in sound and convenience functions.

The 2020 QLED 8K TV has strengthened its upscaling function that converts to 8K-level high-definition regardless of the quality of original images. Broadcasting that does not support 8K can also be watched with 8K-level quality. Samsung said that the neural network, which mimics neurons in the brain, can be optimized for upscaling no matter what images are inputted to produce optimal algorithms.

It also newly applies an "adaptive picture" function. TV automatically adjusts the brightness and contrast ratio of screens as it recognizes surroundings. There is no need to deliberately close curtains or turn off lights even in sunny places.

With AI technology, Samsung improved the quality of images and realized rich sound quality. 'OTS (Object Tracking Sound) Plus' is a technology that allows TV speakers to recognize objects that are moving in an image. Surround sound can be implemented without separate 5.1 channel speakers. When a car passes by quickly, the sound moves in tandem.

When connecting a separate soundbar to a TV, it has added a "Q Symphony" function that uses both TVs and soundbar speakers to find the best sound. The "Active Voice Amplifier" function, which automatically adjusts the speaker’s voice size in the image by recognizing ambient noise, is also drawing attention.

The third generation of ALPHA 9 recognizes the face and text of a person on the screen. It makes the tone of the skin natural, allows detailed facial expressions, and shows the border area of the text more clearly. The 8K upscaling function allows users to enjoy 2K or 4K resolution images with 8K-level quality.

There is another strong point. It recognizes the types of images that are reproduced on their own. It identifies the genre of content that viewers watch, such as sports, movies and animations, and then optimizes the image quality. Acoustic settings change depending on contents. It makes the voice clearer for news watching and the sound of effect for watching a movie. It also has a function that converts two-channel sound into 5.1-channel surround sound and implements sound in a three-dimensional manner suitable for TV’s installation space.

The natural language voice recognition function based on LG's AI platform "ThinkQ" has been strengthened. It is available in 144 countries around the world and supports 20 languages. It has AI secretaries such as "Google Assistant" and "Amazon Alexa" and also works with Apple’s "Airplay 2" and "Home Kit" services.

The AI home board feature, which was first introduced last year, is also available as voice. The function identifies and controls smart home appliances through TV screens. Starting this year, it is possible to operate home appliances easily even away from TVs with only voice commands.

-- This year marks the start of 8K TV. Samsung and LG are all about preempting the market --

The two companies are expected to avoid a direct war at CES 2020. They engaged in a fierce battle last year over the quality of 8K images, filing complaints with the Fair Trade Commission against each other. Market watchers predict that Samsung will take a breath as it earned 8K UHD certification from the Consumer Technology Association (CTA), which hosts CES. CTA specified a clause banning slander against each other in contracts for participating in the exhibition.

However, there is a possibility that the two companies, which are concentrating all their efforts on preempting the market, will continue an indirect war of nerves. As of the third quarter of last year, Samsung Electronics has an overwhelming lead in the 8K TV market with about 85 percent. Industry sources believe that since the 8K TV market has just taken its first step, it is difficult to predict the market’s landscape.

This year's 8K TV market is expected to have full-fledged growth momentum with the Tokyo Olympics. Market research firm IHS Markit predicts that the global 8K TV market, which stood at only 120,000 units last year, will grow to 300,000 units this year and five million in 2022.