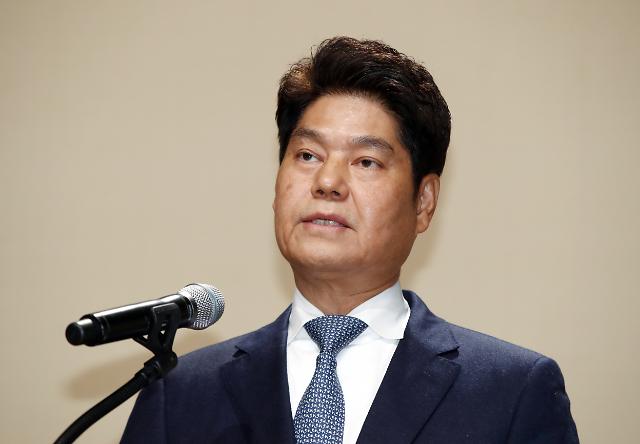 
SEOUL -- South Korea's top entertainment and media contents company, CJ E&M, promised to provide full support for two project bands, IZ*ONE and X1, to resume their activities which have been suspended since two main producers of Mnet, a popular TV music channel, were arrested for their role in a vote-rigging scandal.

"This is our fault with no excuse," CJ E&M CEO Huh Min-hoe told reporters on Monday, apologizing for the scandal that sparked widespread anger from fans, forcing the two project bands, which were formed through Mnet's audition show, put off their activities. "All responsibilities lie with us, and we will support everything related to the resumption of activities by IZ*ONE and X1."

In early November, police arrested two producers of Produce X 101, a boy group survival reality show, on charges of rigging votes cast by fans in favor of particular contestants. One producer told investigators that Produce 48 votes were also rigged. IZ*ONE's nine members from South Korea and three from Japan debuted in October 2018 after they were selected through Produce 48, a girl band audition show.

For damage relief, CJ E&M will provide compensation and financial support for IZ*ONE and X1 to resume suspended activities at an early date, Huh said, adding his company would give up any profit from the future activities of both groups. "I feel so sad to think of the wounds of trainees who devoted all their energy to the dream of debuting. I am so sorry to fans and viewers."

CJ E&M, a key distributor and exporter of Hallyu (Korean cultural wave) in Asia, would create a fund worth about 30 billion won ($25.8 million) to secure diversity in music, develop a healthy ecosystem in the music industry and support K-pop's global expansion, Huh said, suggesting his company would run a committee of independent experts to enhance fairness and transparency.

Mnet has played a crucial role in discovering many talented K-pop artists. Produce 101 has been a preferred stage for trainees who wish to become a K-pop idol. Viewers choose 11 members out of 101 trainees from different entertainment companies and independent trainees through online and live voting with multiple elimination rounds.